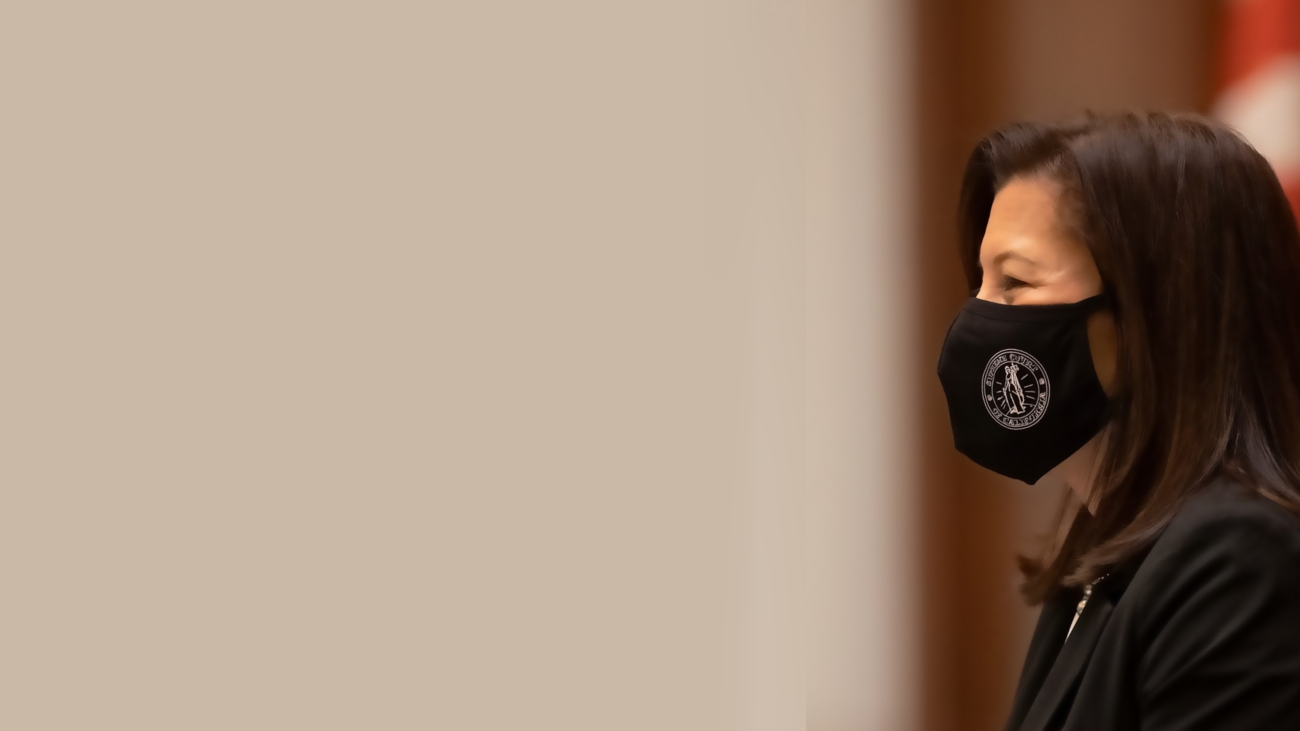 How the judicial branch kept courthouses open during a year of unprecedented challenges.

Chief Justice Tani G. Cantil-Sakauye in March delivered her annual State of the Judiciary Address, calling courts “centers of social justice” that often see those in crisis who rely on the justice system.

Her words were echoed days later, as Gov. Gavin Newsom declared a state of emergency due to COVID-19. Making it clear that the court system is an “essential service,” the Governor later approved an emergency order empowering the Chief Justice and the Judicial Council to take necessary action to enable the courts to conduct business and continue to operate during the pandemic.

Chief Justice Halts Jury Trials
Amid growing concern for the safety of courthouse users, the Chief Justice issued a statewide order to suspend jury trials for 60 days and allow courts to immediately adopt new rules to address the impact of the pandemic. Her March 23 order was aimed at ensuring California courts—that remained open as "essential services"—could meet stringent health directives, such as maintaining social distancing, to curb the spread of COVID-19.

The rules also encouraged courts to use technology to conduct court proceedings and business remotely.

Courts Use Technology to Limit In-Person Proceedings, Reinvent Services
Making good use of statewide orders, advisories, and rules of court developed during the pandemic, many trial courts launched or expanded ways to provide safe access to justice, including:

In their own response to the pandemic, the California Supreme Court and state Courts of Appeal transitioned to remote oral arguments, where justices and counsel appear via video or teleconference. 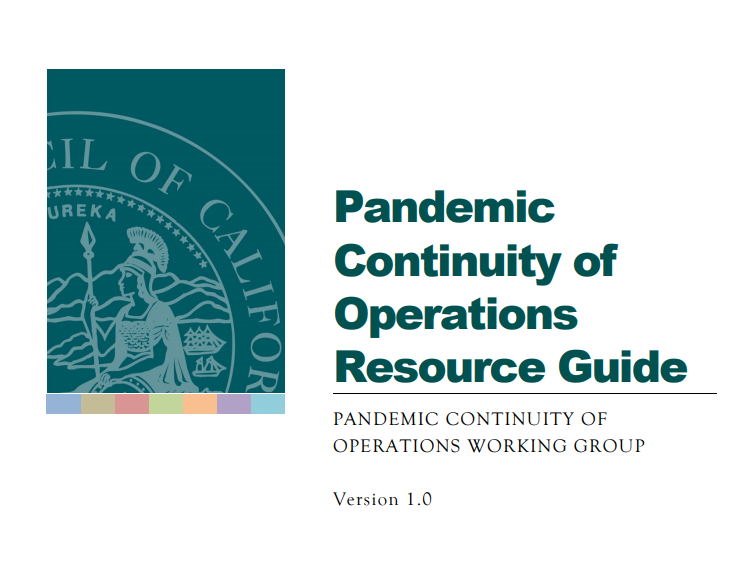 The Judicial Council allocated $25 million from the state budget to fund 13 statewide technology initiatives to expand access to court services during the pandemic, including remote appearances and virtual customer service centers. A special council working group also released a pandemic resource guide for courts with resources and best practices addressing facilities, personnel, jury management, case management and processing, and communications. The council also worked with the California Office of Emergency Services to get courts more than 700,000 personal protective (PPE) items, including masks, hand sanitizers, and wipes.

Council Ends Hold on Evictions and Foreclosures as Legislature Acts

As of September 1, the council ended temporary statewide rules governing evictions and judicial foreclosures as the Governor and the Legislature finally had the opportunity to address pressing issues caused by the pandemic’s economic fallout. The council created an evictions webpage that includes information about that state legislation and the federal eviction moratorium, as well as checklists and forms for tenants and landlords.

Fast Tracking Criminal Cases
In December, the Chief Justice launched a program to fast track the resolution of some criminal cases to help ease the significant criminal case backlogs accrued during the COVID-19 pandemic. At the request of a trial court's presiding judge, the Chief Justice can provide judges from the Temporary Assigned Judges Program to conduct readiness conferences or cover matters for local trial court judges assigned to these conferences.

Maintaining Access to Justice Through Collaboration
Throughout the year, council and court representatives met virtually with justice system partners and stakeholders, as well as legal aid providers about the impacts of the COVID-19 pandemic on access to justice. Discussions covered issues such as state and local public health protocols, use of technology, and language access, and the conversations informed the statewide rules, orders, and advisories meant to help courts stay open for business while protecting the health of court users. Despite the substantial challenges posed by the pandemic and the resulting delays for certain case types, California courts never fully closed, but remained open as an essential service to the public.

The COVID-19 News Center has a status update on court services and operations available during the pandemic. 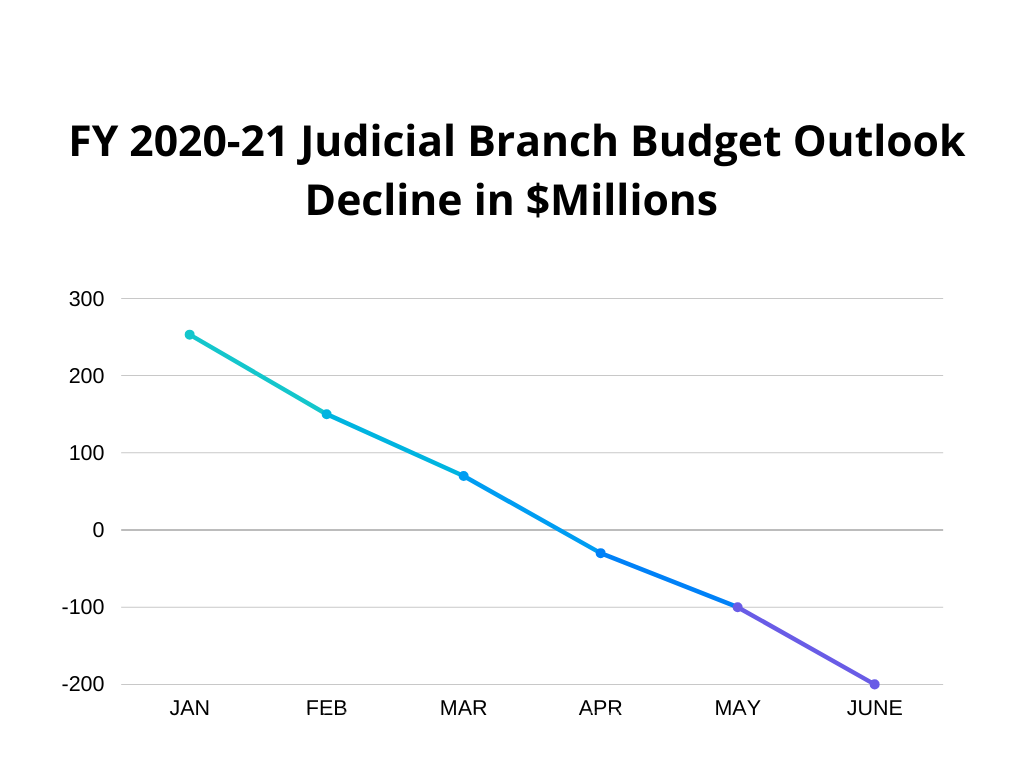 Economic Crisis Prompts Budget Cuts
The state—and the judicial branch—saw a bright economic situation at the start of 2020. The Governor’s January budget proposal for the judicial branch included $253 million in new money to address operational costs. The proposal also promised to set aside $2 billion over the next five years for new courthouses. That rosy outlook and potential new money disappeared by June—obliterated by the COVID-19 economic fallout. The final fiscal year 2020–21 judicial branch budget instead called for cuts of $200 million, which has forced many courts to reduce staff and services to the public.

How Courts Can Help with Homelessness Crisis
The Chief Justice launched a new homelessness work group to find ways the judicial branch can further assist people experiencing homelessness or facing the possibility of losing their homes. The judicial group will study how laws, court services, technology, and judicial branch property could be better utilized to address the crisis exacerbated by the pandemic.

Focus on Racial Justice
In response to disturbing events locally and around the nation, the Chief Justice spoke out on racism and bias, followed by a joint statement of the California Supreme Court justices on equality and inclusion.

We must continue to remove barriers to access and fairness, to address conscious and unconscious bias—and yes, racism. All of us, regardless of gender, race, creed, color, sexual orientation or identity, deserve justice.

Addressing Bias in the Court System
The California Supreme Court created a work group to study changes or new measures to guard against impermissible discrimination in jury selection, while the Chief Justice announced a new work group to update a judicial standard that outlines steps courts can take to prohibit bias in courtroom proceedings.

California Supreme Court Welcomes New Justice
Governor Newsom on December 8 virtually swore in Justice Martin Jenkins, the first openly gay California Supreme Court justice and only the third African American man ever to serve on the state’s highest court. “In swearing in Justice Jenkins today, our state once again makes history, and we elevate an extraordinary Californian to the bench,” said Gov. Newsom.

Courts Maintain Outreach Programs
COVID-19 not only spurred courts to hold more court proceedings remotely, it also forced them to use remote technology to support community engagement. For example, in San Diego, judges created an online alternative to their in-person Judges in the Classroom program. In May and June, more than 580 students participated in 18 virtual sessions. In San Bernardino, the court used remote technology to host its "Virtual Townhall on Civil Unrest and Racism: What Are We Doing?" that was moderated by judges with representatives from local and state justice partners serving as panelists.

What is the Judicial Council?
The Judicial Council is the policymaking body of the California courts, responsible for ensuring the consistent, independent, impartial, and accessible administration of justice. The council develops judicial branch goals in its strategic and operational plans and carries out its mission with help from its advisory committees, task forces, and staff, as well as local courts throughout the state. Each year the council helps implement new legislation, adopts hundreds of new court rules and forms, and stewards statewide initiatives, programs, and services for courts and the public.