Thank you, it is a pleasure to be here. Thank you Senate President Pro Tem Atkins, Senator Jackson, and Speaker Rendon. Thank you to our constitutional officers here on the podium. And of course and always, thank you Lieutenant Governor Kounalakis. It’s a pleasure again to be here with all of you.

Considering that we are celebrating the 100th anniversary of the 19th amendment, giving women the right to vote, I’m certain that our suffragette ancestors would be proud to see so many California women leaders in the room.

I’m also proud to be here with my colleagues from the Supreme Court, the judicial branch, the Judicial Council, the Bench Bar Coalition, the California Judges Association, and the State Bar.

I’m thankful that some of my friends and family are here, including my husband Mark, and our two daughters, Hana and Clare.

I’d like to take a moment to thank Governor Newsom for his proclamation declaring February 19th as A Day of Remembrance, to honor the sacrifice and resilience of the Japanese Americans who—without evidence and due process—were forced from their homes to live in internment camps for years.

Two of those people are here today: my in-laws, Jiro Sakauye and Dorothy Sakauye.

In his proclamation, the Governor went on to recognize men, like my 91-year-old father-in-law Jiro, who upon release from the camp, became of age, volunteered for the United States military and served in the Korean War.

I also want to thank the Assembly, particularly Speaker Rendon, and Assembly Member Al Muratsuchi, for their resolution of apology for the then-California Legislature’s cooperation in the internment of Japanese-Americans during World War II.

I understand the Senate will be seeking a similar resolution introduced by Senators Pan and Atkins.

These actions of remembrance and apology—in a time of national bans, xenophobia, and hostility—are beacons of hope when our California leaders take this kind of action. I know we can rely on our three branches of government and our California leaders to keep their heads during the coronavirus epidemic and take all steps to keep us safe and protected.

In the Governor’s State of the State, he talked about the California dream.

He didn’t define it. He didn’t have to because all of us know what that is.

That’s why I want to take this moment to acknowledge Justice Ming Chin, who personifies the California dream.

He is a person of extraordinary intellect, gained not only from books and degrees, but also from hands-on hard work and experience. Justice Chin possesses a rich wisdom and an irreverent wit.

One of eight children, Ming worked seven days a week and knew how to operate a hay bailer and a combine before he could drive.

His parents never finished elementary school, but they knew the value of an education. So they sent Ming to board with a local judge. In true judge fashion, this judge had Ming the middle schooler read Blackstone’s Commentaries on the Laws of England.

Surprisingly, this did not deter Ming from the practice of law.

He went on to serve in the military as a U.S. captain in Vietnam. He is a decorated veteran.

He then came back and turned his attention to the law and again he excelled.

Given his many decades of public service as a lawyer, judge, and justice, he has become an expert in technology and the science of DNA.

He co-chairs our Judicial Council, our policy- and rule-making body, and continues to teach justices to this day.

I dwell on his life because he exemplifies the intellect and integrity of our more than 2,000 court officers and approximately 20,000 court employees.

Justice Ming Chin is a jurist without parallel. His 25 years of wise and practical jurisprudence on the California Supreme Court will guide this state for years to come.

I dwell on his life because of who he is and what he has done. But I actually knew of Ming before I met him. I will tell you about that in a few moments.

Here and now in the Legislature, you grapple with the state’s most vital issues: homelessness, the environment, health care, education, and our aging population, as well as funding and litigation threats by our federal government that undermine our ability to address these issues.

Last year alone, more than 878 of the Legislature’s bills were signed into law.

These laws were the product of deliberation, discussion, and debate. Rightfully and properly, you held yourselves accountable, and you held others accountable.

Alexis de Tocqueville once famously said, “There is hardly a political question in the United States which does not sooner or later become a judicial one.”

So, your issues pivot to the judicial branch and we become accountable. We our accountable by our fair and impartial hearings, with our reliance on the facts to make findings, and of course the rule of law.

We are also accountable in other ways because we do justice, in the name of justice.

We do it under the banner of three-dimensional access to justice—that justice be equal, physical, and online.

Take, for example, the one-time innovative grant funding you provided to the Judicial Council. We distributed that to the trial courts based on their ability to increase equal access in their jurisdictions.

Some of the programs include:

More than 400 collaborative courts in California provide treatment and support, including a Fresno human trafficking prevention court and a @SFSuperiorCourt for veterans pic.twitter.com/hKONGAlzqJ

Under the banner of physical access to justice, with your help we have been able to:

Under the banner of online access to justice, we have:

Accountability also requires us to reckon with our past and the consequences of government action, neglect, and missteps that happened before any of us were here.

In recent times, all of us have come to understand that racial and income inequality can often create barriers to access to justice and affects the democracy that each of us experiences.

Yet, in our nation-state of California, we work together to address these issues, to identify and reform systems of inequity.

During my administration, we have championed the needs of the impoverished and overlooked. We have developed and worked on many programs, including:

If you look at the branch over the last several years, you will come to realize as I have that we have become more than a place that resolves disputes. We have become centers for social justice.

As Chief Justice, I have spoken out when my conscience demanded it—on fines and fees, on sexual harassment and unconscious bias within the judiciary, and on federal immigration interference in our state justice system.

Because we have become centers of social justice, and courts often see people who are in a crisis that can lead to homelessness, I will appoint a workgroup to study how we can become better partners in the crisis of homelessness. This workgroup will report back to me later this year.

Among other things we will ask ourselves:

I firmly believe that the justice we do today will affect our communities of tomorrow.

In closing, this is where I want to tell you how it is I knew of Justice Chin, before I met him.

He was recently asked about which opinions or decisions he was most proud of. He cited a dissent he wrote as a Court of Appeal justice. In that dissent, he argued that “the battered women’s syndrome” should be a legal defense in a domestic violence prosecution. He was the dissent on the Court of Appeal.

When he became a Supreme Court justice, he authored an opinion recognizing battered women’s syndrome as a defense in a domestic violence case. That was 1996.

In 1997, I was presiding over the first-ever domestic violence court in Sacramento—this was before we even coined the phrase “collaborative court” or “restorative justice court.”

Justice Chin’s decision was groundbreaking. It finally allowed us to understand the pathology of domestic violence and its effect on women, children, families and future generations. It changed the legal landscape forever. It allowed us a window, a terrifying window, of the terror of the life of a victim.

So thank you, Justice Chin, for your public service and your visionary leadership. Because I believe you demonstrate that when we are open minded, when we deliberate fairly, and when we come together for necessary changes, we can preserve and create and expand justice for all in California. 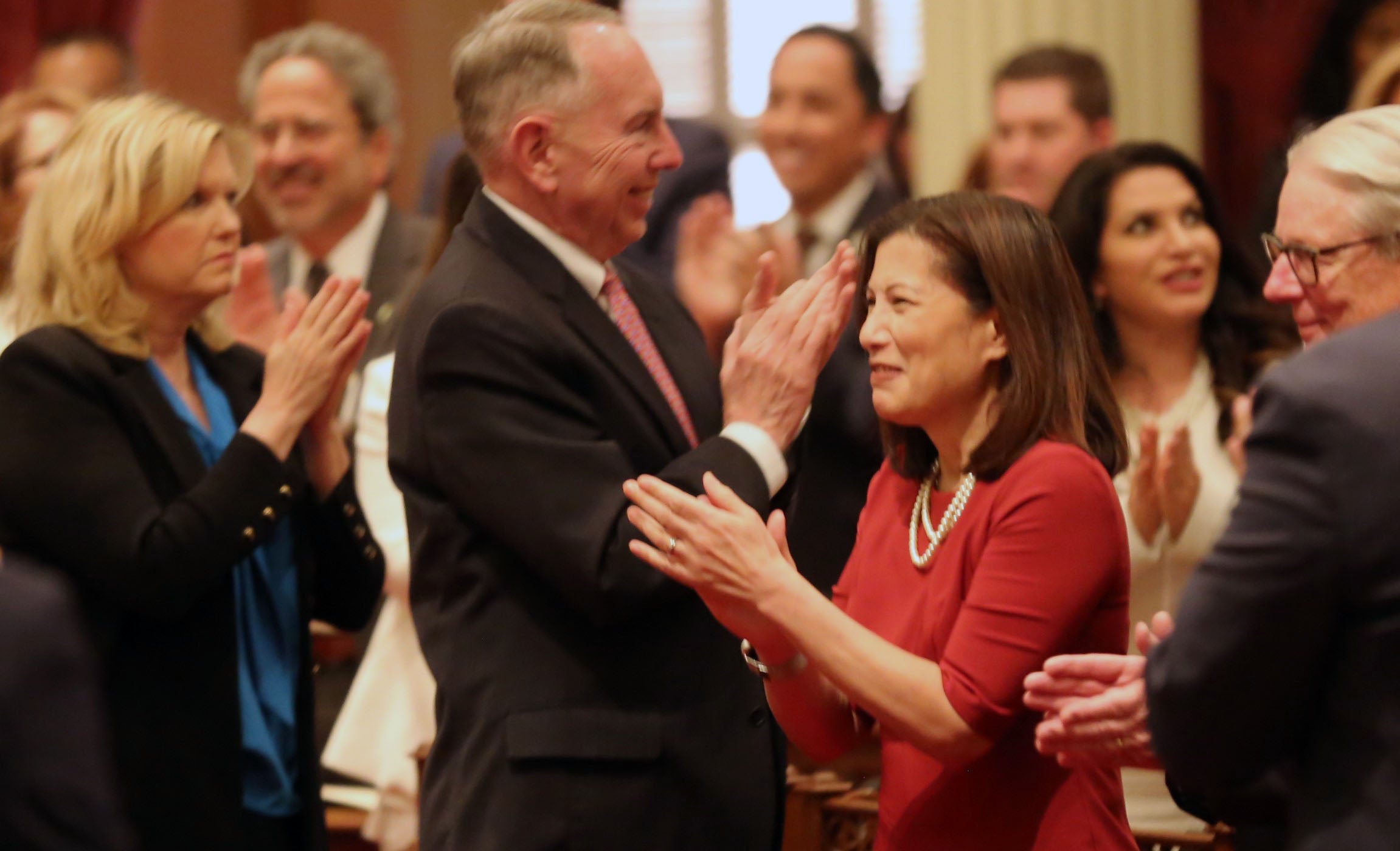 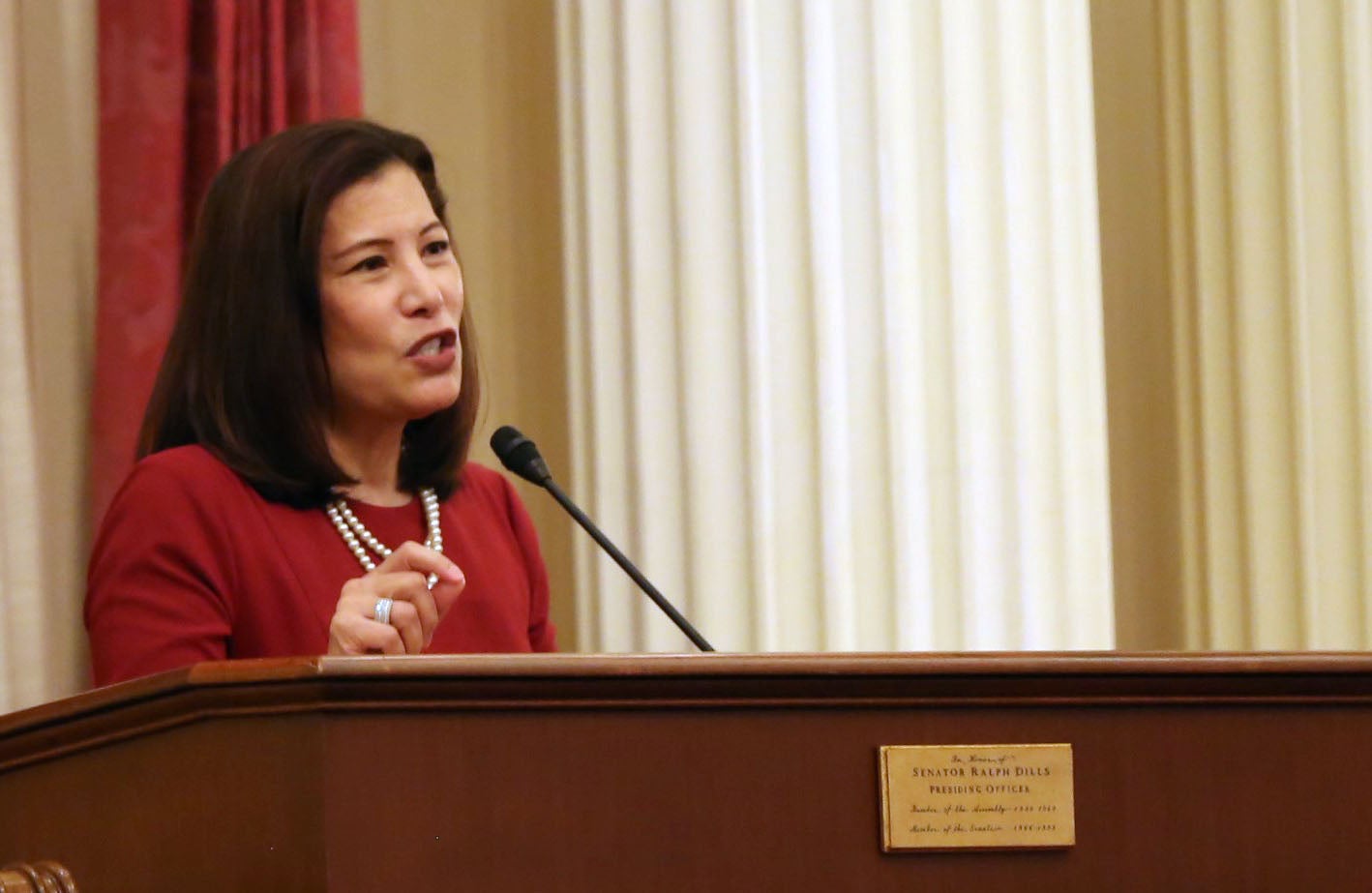