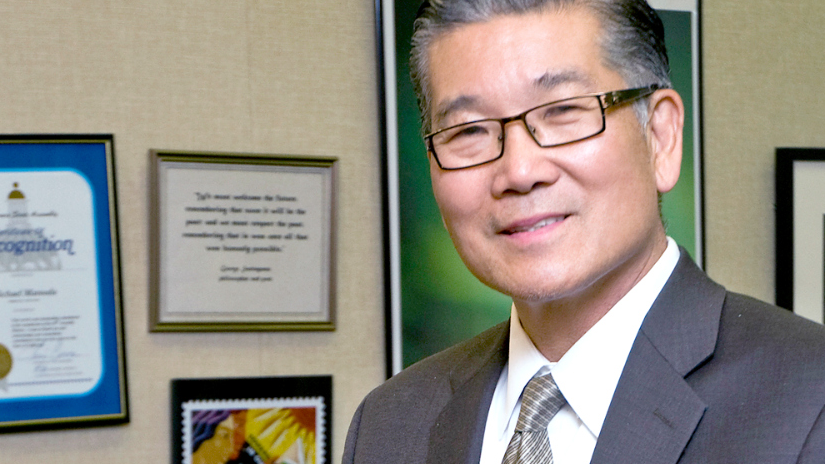 In the Anaheim Union High School District, democracy is at the forefront of learning – and it starts with educators.
By Judicial Council Public Affairs

In the Anaheim Union High School District, democracy is at the forefront of learning – and it starts with educators.

The district's superintendent, Michael Matsuda, is one of five outstanding educators and leaders named this year’s Champions of Civics in honor of their commitment to civics education both in and out of the classroom.

The district employs 1,200 teachers to educate its more than 29,000 students.

More than 300 of those teachers are specially trained in civic engagement.

“Before a district [can get] moving on civics engagement and preparing students for the Seal of Civic Engagement, [we] train teachers,” Matsuda said. “Students want to talk about engaging issues from race to mental health to climate change, but they need to have a very safe forum.”

The superintendent has led the district since 2014 but worked as a teacher in Anaheim for 22 years.

Fifteen of the district’s 19 middle and high schools are considered “democracy schools,” which ensures students have at least one opportunity to engage in civics through programs addressing climate change, bias, mental health, democracy and other social issues. This allows students to have a “voice at the table,” Matsuda said.

“Democracy and modeling democracy – we’re not born with that, it’s not in our DNA,” Matsuda said. “And what institution is primed to teach that and model it but public school? Before you get there, you have to invest in the teachers.”

Matsuda said preparing students to take an active role in democracy once they graduate can be challenging.

“In California, we have six million K – 12 students who will become voting citizens, so it’s incumbent upon public schools to ensure that they have the grounding in developing their own authentic voices,” the superintendent said.

Schools in the Anaheim Union High School District have earned 28 Civic Learning Awards since 2012. The district also leads the state in the Seal of Civic Engagement with 1,965 graduating seniors receiving the honor this year.

"In a district as big and diverse as ours, there has been tremendous movement in the last couple of years,” said Dr. Jeff Kim, a district teacher who nominated Matusda.  "Our superintendent, he is the real deal."

This year's Champions of Civics were named as part of the Chief Justice Tani G. Cantil-Sakauye's annual Civic Learning Award program, now in its ninth year

The award is co-sponsored by the chief justice and State Superintendent of Public Instruction Tony Thurmond.

To learn more about the awards program, click here.