Three teachers, a community organizer, and a school district superintendent are among the Champions of Civics being honored with a 2021 Civic Learning Award.

This year's Civic Learning Awards were adapted to celebrate people and programs successful in engaging students in civic learning, particularly those not putting civics aside during the pandemic.

Nominations for Champions were solicited with the award application last Fall. Members of the Chief Justice's Power of Democracy Steering Committee reviewed, ranked, then discussed each of the nominations before making their final recommendation to co-sponsors Chief Justice Tani G. Cantil-Sakauye and State Superintendent of Public Instruction Tony Thurmond.

"We had a lot happen in the last year, pandemic aside," says Steering Committee Chair Justice Judith McConnell. "Elections, the 2020 Census, and social justice movements gave classrooms a lot to work with. The committee felt this was the year to shift focus and highlight classrooms and the people who make sure civics remains accessible."

The Chief Justice and State Superintendent will host the champions for a virtual meeting later this month.

Gabriela Manzo is a community organizer with La Cosecha, which operates under the Building Healthy Communities initiative funded by the California Endowment. As a youth organizer, Manzo works with a group of 50 students from five high schools in Salinas, focusing on student representation and helping students advocate for equity in their schools and community.

A native of Salinas, Gabriela helps youth develop strong leadership skills by participating in civic processes and using their voices to advocate for their community.

Students in Jose Sanchez’s civics and history classes at Alhambra High School are required each year to participate in a political campaign, city council or school board meeting.

Sanchez also asks students each year to look at a political issue and take action in the community, either on a local, state or federal level.

In 2018, Sanchez’s students drafted legislation aimed at tackling gun violence, particularly in schools. The legislation, drafted shortly after the shooting at Marjory Stoneman Douglas High School in Florida, looked to change the age and requirements for gun ownership. The legislation was later introduced to Congress by Southern California Rep. Judy Chu.

Sanchez has taught history and civics at Alhambra High School for 15 years.

In 2020, teacher Isaac Farhadian encouraged his students at Turlock’s John H. Pitman High School to participate in a statewide mock election program, the first time the school has ever participated in the program.

The mock election allowed students to see the democratic system first-hand, researching candidates and ballot measures and participating in the electoral process. Because of the COVID-19 pandemic, students voted virtually – though in the future, the school will transform its classrooms into voting booths.

Additionally, Farhadian, a government and economics teacher, established a local chapter of the Junior State of America to promote civic engagement and educate students on political propositions, candidates, community service and activism.

For nearly two decades, students in de Alba’s class have been required to complete at least one community service project.

In 2013, de Alba led a project to build “Patriot Plaza” at his school, raising $70,000 and designing the plaza himself. The project taught students the importance of history and patriotism.

During his tenure, de Alba has also led numerous field trips to Sacramento and California missions, outings not typically paid for by the district. He puts a high value on these experiences for youth, and puts on his fundraising hat to secure funding through grants and awards for those who otherwise couldn't afford to go.

Michael Matsuda, the superintendent of the Anaheim Union High School District, is known for his innovation and unique approach to learning and leadership. Superintendent Matsuda has worked tirelessly to implement and expand civic education in grades K-12.

Indicative of Matsuda's dedication to civic engagement and leadership, 28 schools in his district have earned Civic Learning Awards since the program began nine years ago.

Prior to becoming superintendent, Matsuda spent more than two decades as a teacher in the Anaheim Union High School District. 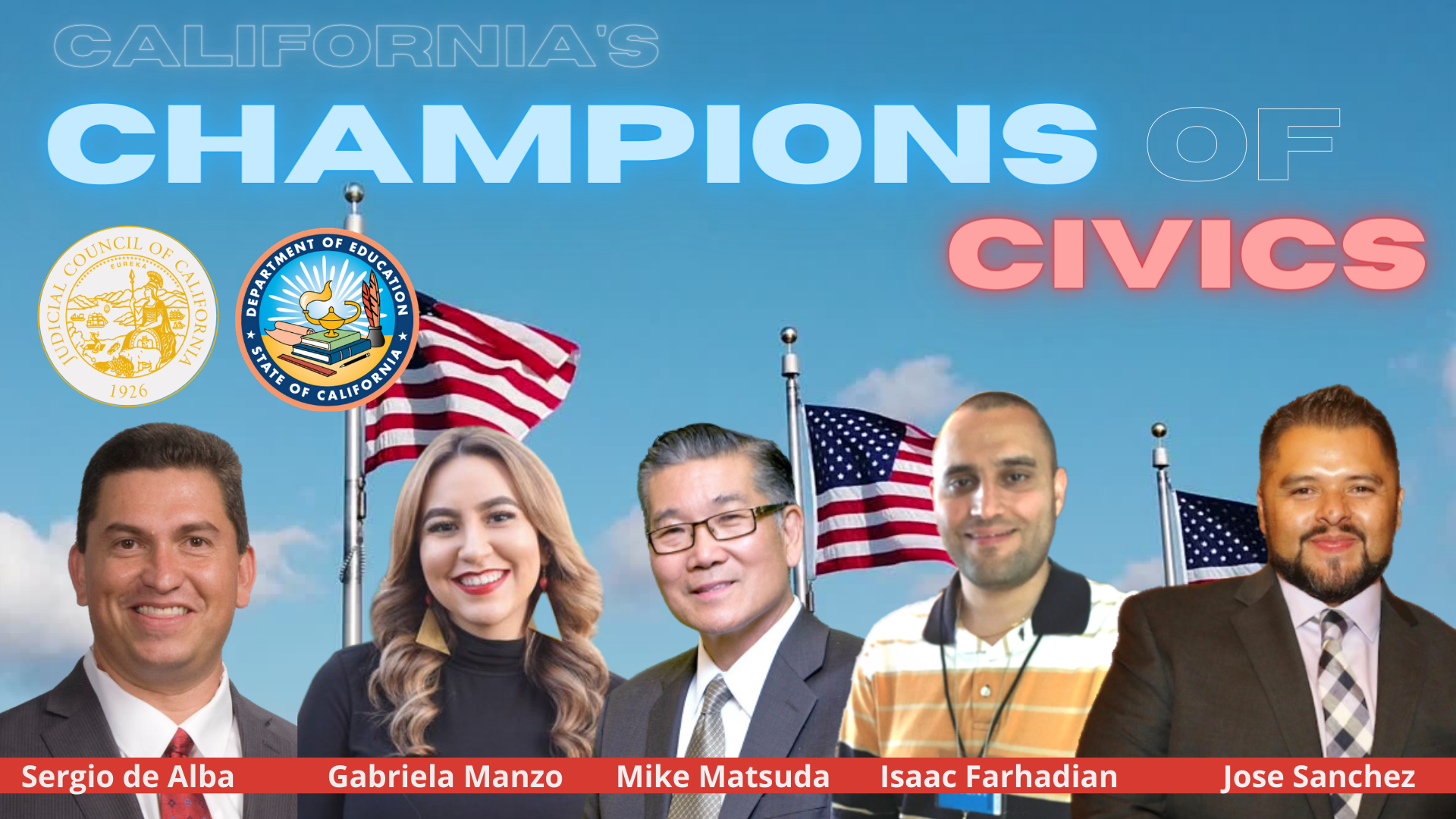