From September 2015 to August 2016, the court issued 78 written opinions, which decided matters of statewide importance, maintained uniformity in the law throughout California, and disposed of 19 automatic appeals filed with the court following a judgment of death. Petitions for review, and habeas corpus petitions (both capital and non-capital) represented the other main workload drivers, and the court continued to exercise its responsibility to review both attorney and judicial disciplinary matters.

The court continued its 15-year tradition of outreach to students to broaden their understanding of the judicial branch. In addition to opening its courtrooms to the public in San Francisco, Los Angeles, and Sacramento, the Supreme Court annually brings oral arguments to local high schools and law schools. Court staff work with schools months in advance of these sessions so that students can discuss the cases with their teachers before hearing arguments in court.

This year the court set up in the Milton Marks Auditorium in San Francisco to accommodate more than 100 students, teachers, and other members of the public interested in observing oral arguments on October 6, 2015. High school students from Oakland and law school students from Los Angeles gathered in San Francisco to hear three cases on the court's morning calendar. Following the morning session, Chief Justice Tani G. Cantil-Sakauye invited students to remain while selected students asked questions of the justices. The session is available on the California Channel. 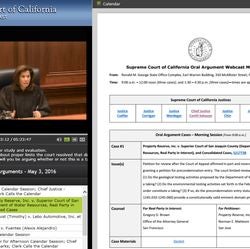 The court began providing remote access to its oral argument calendar sessions in May 2016 and began live webcasting with real-time captions in English and Spanish. The court received more than 8,000 live views during its May and June oral argument calendars and has established an archive where all of its webcasts can be accessed online. Use of this technology has benefited key stakeholders and exposed thousands of viewers to court oral arguments and procedures. It has also assisted the media in pursuing accurate information concerning court activities.

Effective July 1, 2016 the court amended the California Rules of Court to eliminate the practice of automatically “depublishing” published Court of Appeal decisions when the Supreme Court grants review. This action followed a public comment period during which nearly 40 comments were received from numerous bar groups, lawyers, and judges. The court’s decision to adopt the amendments was unanimous and the court plans to revisit the issue within three years to assess the need to make any further changes.

In its appointment of State Bar Hearing and Review Judges to the State Bar Court, the court continued its oversight of its administrative arm, the State Bar of California, and its professional members who are officers of the court. The court's committees, the Advisory Committee on the Code of Judicial Ethics and the Committee on Judicial Ethics Opinions (CJEO), continued to provide judicial ethics guidance and support to California's judiciary. CJEO provided opinions, following public comment, on issues ranging from the disqualification of a judge who is a former prosecutor from a criminal proceeding, to guidance for judges on attending political fundraising or endorsement events. Chief Justice Cantil-Sakauye and judicial leaders in California's six Courts of Appeal also approved a new policy allowing judicial branch staff attorneys to provide pro bono legal services without compromising their work for the appellate courts.