"You either self-destruct or you become a champion for others."

A Q&A with Judge Donna Groman, a 2018 Distinguished Service Award recipient, who overcame a tough childhood to become an advocate for California's at-risk youth.
By Merrill Balassone

Q: You’ve spoken about your childhood challenges growing up in New York City housing projects. Did those early experiences drive you to work in juvenile justice, first as a lawyer representing parents in custody cases to presiding over one of the nation’s largest juvenile courts?

A: When you have challenges as a young person, you either self-destruct or you become a champion for others. I chose the latter path, because I didn’t want other people to have to go through experiences that I did, and having to fend for yourself and not being able to count on the adults around you who are either supposed to protect you or not do any harm. 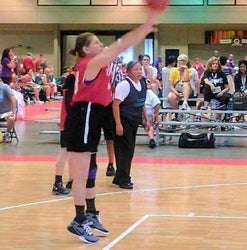 I also loved playing sports. It was my one escape, yet it was frowned upon. You were made fun of, you were a tomboy, you were criticized for being an athlete. And for me, that was my one healthy outlet. So it made things even more difficult. [Judge Groman, at left at the free throw line, still competes in basketball as a member of a senior women's league].

Q: When you trained fellow juvenile judges, you refused to refer to juvenile offenders by a now outdated term: “delinquents.” Why was it important to change the label?

A: If you look in the dictionary, a “delinquent” is a young person who does illegal things, and we really need to take the focus off of what somebody does and look at who they actually are. It's not just young people who commit crimes who come into our court. There are young people who are accused of committing crimes who haven't been convicted, and also victims, families, community representatives. It's about a holistic approach to what I would love to call “youth justice”—it should be a court of justice for everybody.

Titles give first impressions, it’s like a snapshot of what you are going to find inside. If you walk up to a building and it says "delinquency," what kind of message does that give out? 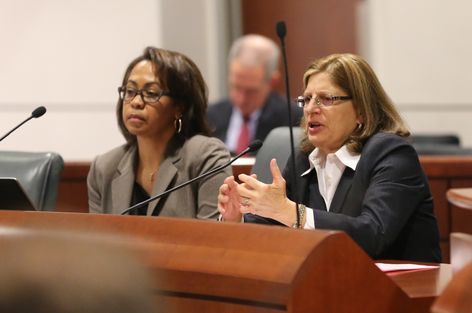 Judge Groman, right, speaks to the Judicial Council as part of the Keeping Kids in School and Out of Court Initiative created by the Chief Justice.

Q: You’ve given advice to others to pick a single issue and dedicate themselves to it to truly bring about change. What is the accomplishment you are proudest of?

A: I think the biggest issue that has taken off is the issue of sex trafficking of children. It started for me in a case with a young lady, and I wasn’t really listening to her about what it was like. I just made the assumption that she could choose not to become victimized, and I soon realized that was a terrible approach.

So I went about trying to learn more. And in 2014, I testified before the U.S. House of Representatives Judiciary Committee about the prevalence of commercial sexually exploited children and the foster care system. That was a pinnacle.

Q: What's the issue that's currently on your mind?

A: Now that I'm in mental health court and dealing mostly with adults, it's really disturbing to see how many people cycle through the criminal justice system who need mental health treatment. And to the extent that I can impact some change on that, we really need to start looking at treatment of people with mental illness in the community.

Q: If you could give one piece of advice to today’s youth, what would it be?

A: I would say no matter what else you do for yourself or to yourself, education should be the number one priority. It's like the old adage that education is the key to success—it really is true, for everyone.