Lessons from the Old Courthouse in El Centro

In a commentary, Justice Mariano-Florentino Cuéllar reflects on growing up in the Imperial Valley and progress achieved through the Keeping Kids in School and Out of Court Initiative.
By Merrill Balassone

California is home to 9 million people under the age of 18. Recently, as I crossed the mountainous divide separating San Diego from the inland desert on my way to the Imperial Valley, I found myself reflecting on the enormous divides of a different sort—involving poverty, neglect, and school discipline problems—that frustrate the lives of all too many kids in California.

As a former resident of the Imperial Valley, I was more than a little familiar with my destination: the old courthouse in El Centro where, nearly 30 years earlier, I’d represented Calexico High School as a member of its mock trial team. Back then I dreamed of someday being in public service in California.

Now, I felt grateful for the many people who helped me along the way. I was especially moved to see among the audience someone else who’s had similar opportunities: my feisty former mock trial opponent, who now also wears a judge’s robe to work as a Superior Court judge.

But the people gathered at the courthouse on that day were not jurors or lawyers preparing for court. They were probation officers, teachers, judges, and community leaders supporting the courts’ Keeping Kids in School and Out of Court Initiative––a five-year effort to tackle absenteeism, truancy, and school discipline throughout the state. 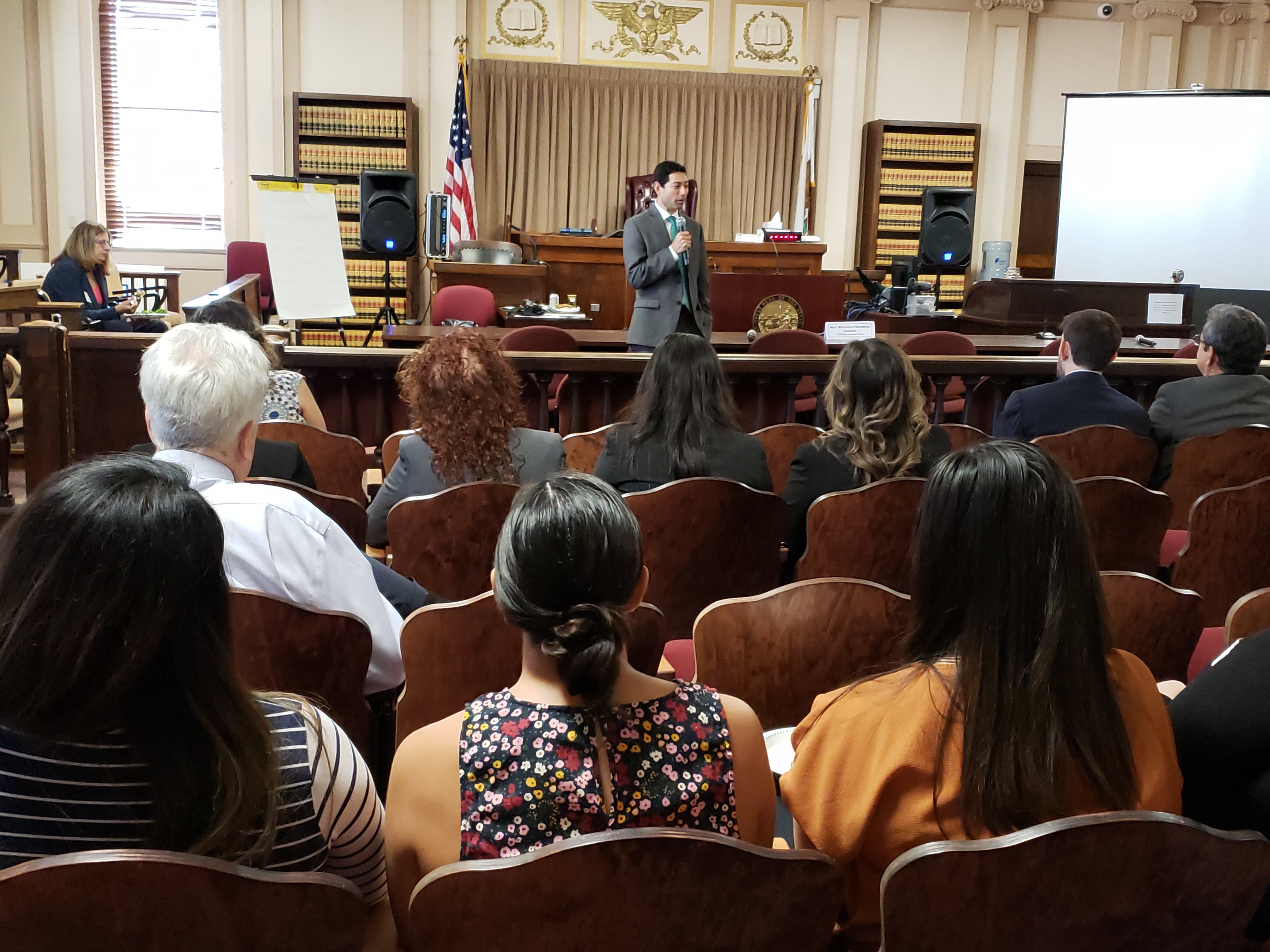 In the courts, we face the painful reality of seeing students pushed out of classrooms and into the juvenile justice system. As I’ve traveled across the state to meet trial court judges and observe their work, none of what I’ve seen seems as daunting or heart-wrenching as proceedings involving children in distress.

Last year, nearly one in every 10 California high schoolers dropped out before earning their degree, almost 50,000 students in total. These students will likely miss out on later opportunities such as attending college, which can greatly increase a student’s income.

Nearly 90% of California workers struggling with poverty do not have a four-year degree, and about 60% of that group has a high school education or less.

In contrast to that daunting reality, most colleges, especially mid-tier public institutions, successfully increase income mobility across generations for students from all socioeconomic backgrounds.

Like many of my judicial colleagues on the trial court bench and other judicial offices, I recognize that my responsibility goes beyond deciding cases. We must help the public understand what we do and share our collective knowledge. Nowhere is that mission more urgent than when it comes to improving the lives of our state’s children.

In 2014, Chief Justice Tani Cantil-Sakauye launched the Keeping Kids in School and Out of Court Initiative. The goal is to leverage the convening power of the courts to bring together people across a range of fields—from judges and mental health professionals to probation officers and teachers—and tackle the issues that have a profound impact on our state. The effort was inspired by a statewide summit the previous year attended by teachers, community leaders, and professionals from over 30 counties.

To those gathered at the Old Courthouse in El Centro, my message was about how much more we could accomplish together. I emphasized what people from so many walks of life in California understand: that everyone in our state has enormous value––even if many of them don’t yet realize it as teenagers––and that our state is enriched by different life experiences.

For those of us who spent time growing up in the Imperial Valley, those experiences include navigating multiple cultures and, often, learning how to bridge linguistic divides.

Many of us learned to love the desert’s stark landscape and starry nights. We came to appreciate how much life in towns and smaller cities is enriched not only by ties to family, but to neighbors and new arrivals. We lived in a county––still one of California’s poorest––that depended on life-giving water for its soil and life-changing schools for its young.

We saw how the U.S.-Mexico border demonstrates both the enormous powers of government agencies as well as their weaknesses, and witnessed how lack of planning and unintended consequences can create seemingly timeless features of the environment like the Salton Sea.

These life experiences serve to remind us not just of California’s extraordinary breadth and beauty, but how our state’s immense prosperity seems all too remote for some kids growing up in places that deserve a more prominent place in California’s story.

Efforts such as the Keeping Kids in School and Out of Court Initiative are meant to broaden economic opportunity and improve public safety, and bring these narratives more fully into our shared civic life. But the context for such efforts can be daunting.

Nearly half of California workers are currently experiencing or on the brink of poverty, and according to one study, more than 40% have made drastic sacrifices—not making doctor appointments, leaving prescriptions unfilled, or cutting back on food—in the past year.

Progress remains difficult in many rural areas, which have even higher rates of poverty and addiction, underfunded classrooms and less access to alternative discipline practices—like restorative justice—that have been adopted and found promising in some urban districts. For instance, in Southern California, 45% of California workers struggle with poverty while only 27% face similar economic circumstances in the Bay Area.

Some of these challenges are beyond the courts’ capacity to address. But given the role the courts play, the knowledge our judges and staff accumulate, and the convening power of our branch, we have a responsibility to help.

We must, after all, bear witness to what happens when students are pushed out of classrooms and into the juvenile justice system. It is a tragedy for those children and their families, and it also has a major cost to society.

Keeping students on track for graduation leads to productive, healthy lives and means fewer people in our jails or prisons. According to one estimate, increased dropouts resulting from school suspensions for just one California graduating class costs the state nearly $3 billion.

To help students overcome these challenges, we can learn from our experiences so schools, courts, agencies, and mentors can play the most constructive possible roles in ensuring kids find their own voices and possibilities.

A growing consensus bolsters our belief that suspending students from school for acting out often sends them down wrong path. Even one suspension doubles the risk a student will drop out of school entirely.

California has achieved some progress: during the 2011-2012 school year, California issued more than 700,000 suspensions; last year, there were roughly half that number.

Yet disparities remain. Students of color, LGBTQ youth, and those with disabilities continue to be suspended more than their peers, often for minor and subjective offenses such as “willful defiance” of school staff.

African-American students are three times more likely to be suspended than their white classmates. And data show children in rural schools are suspended at much higher rates than students in more populated districts.

Topping the list of the state’s highest suspension rates are districts in rural counties such as Butte and Humboldt, where as many as one in three students were suspended last year. After years of collaborative work on the issue, Imperial County’s Keeping Kids in School team recently reported suspension rates had dropped from a staggering 11 percent of students five years ago to less than 4 percent last year.

Back at the Old Courthouse in El Centro, I was struck by how much California has changed since I was last in that courtroom. The state’s economy is vastly larger and its civic leadership more inclusive.

Yet some of the same daunting challenges from 30 years ago continue bedeviling the state and its judicial system. We struggle with concentrated poverty and school discipline, access to housing and substance abuse treatment, and mental health.

The teachers, social workers, probation officers, and community leaders in the audience left me hopeful about our capacity to give more of its youngest residents the opportunities that can help give them share in the California dream.

To continue on this path in the years to come, we need to ensure our courts are open and accessible to people from every corner of our state, and to make sure voices from places like the Imperial Valley are included in our civic conversation along with those from places like the Bay Area or Los Angeles.

We must retain as much candor as possible about the long-term costs of neglecting the needs of the most vulnerable kids among us, and the risks they face. And we must find the most creative and principled ways to reach the kids whose voices and dreams will help California achieve its full promise.