Technology projects include advancing the use of online and remote tools.
By Blaine Corren

SAN FRANCISCO—The council at its Sept. 20 meeting distributed $12.5 million from this year’s state budget to continue modernizing trial court operations, improving online and remote services, and increasing access to justice for the public.

“We’ve demonstrated that the judicial branch can make great use of technology funding,” said Judge Kyle Brodie, who helped present the technology funding proposal as chair of the council’s Technology Committee. “Our projects have dramatically increased the level of service to the public.”

For example, the council heard about:

“Collaboration between the council and the courts is delivering solutions to the branch, understanding that we are better together than separate,” said Heather Pettit, director of the council’s Information Technology office. “That is something we have modeled over the last several years.” Watch 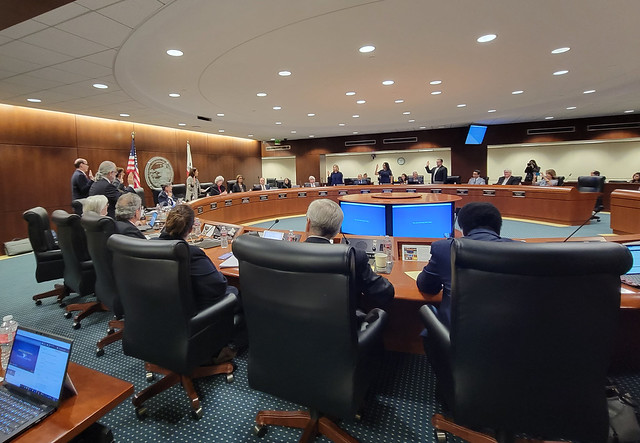 Other items on the September 20 council meeting agenda included:

Funding to Backfill Loss of Fee Revenue: The council allocated $10.3 million from this year’s state budget to backfill the loss of fee revenue to trial courts due to the repeal of civil assessment fees authorized by Assembly Bill 177. Watch

Update on State Budget from Department of Finance: The council received a briefing from Somjita Mitra, chief economist with the California Department of Finance, on the state of California’s economy and the outlook for the state’s finances in the future. She noted the state’s low unemployment rate, quick job recovery, and expected decrease in inflation bode well for staving off a possible recession. But Mitra also reported that the rising average age of the state’s residents, declining birth rate, and disappearing middle class could hinder economic growth. In addition, a recent decline in tax collections could necessitate the need to dip into the state’s $33 billion rainy day fund going forward. Watch