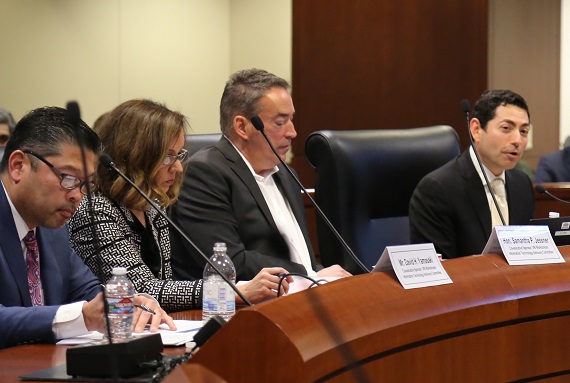 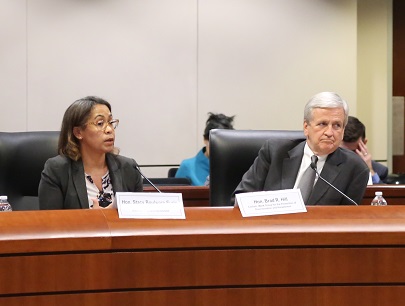 Judge Stacy Boulware Eurie and Justice Brad R. Hill addressed the council on behalf of its Work Group for the Prevention of Discrimination and Harassment, which will make recommendations on improving how judicial branch entities prevent and address harassing, discriminatory, and inappropriate workplace conduct. 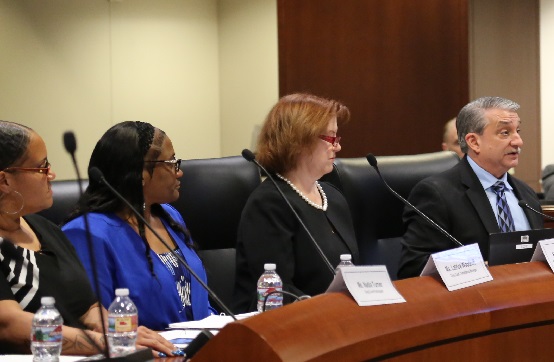 San Joaquin County Judge Richard Vlavianos reported that his county’s recidivism rate for drug court participants was only 7.2% during fiscal year 2017–18, much lower than the statewide average that ranges from 40% to 80%, depending on the jurisdiction.

SAN FRANCISCO—The Judicial Council at its March 15 business meeting approved recommendations for updated Language Access Plan guidelines for video remote interpreting (VRI) that include minimum technology guidelines to facilitate its use. The council also voted to establish a new VRI program for the judicial branch, which includes the development of master contracts with the two approved VRI vendors who took part in the pilot project to assist courts interested in using VRI.

The recommendations stemmed from a pilot project that tested the effectiveness of VRI for certain court proceedings in three superior courts—Merced, Sacramento, and Ventura. The report on the pilot project found that VRI equipment can allow meaningful participation by limited English proficient (LEP) court users and increase access to qualified interpreters when in-person interpreters are unavailable.

“The goal was not, or has ever been, to replace in-person court interpreting, which is always preferred,” said California Supreme Court Justice Mariano-Florentino Cuéllar, former chair of the Language Access Plan Implementation Task Force, charged with overseeing the pilot project. “The goal is to increase access to qualified interpreters when on-site interpreting is not readily available.”

Specifically, the SDSU report found that:

The VRI pilot project was one of many recommended projects included in the council’s Strategic Plan for Language Access in the California Courts. Watch

Progress Report from Work Group on Prevention of Discrimination and Harassment: The council received a progress report on the work group created by Chief Justice Tani Cantil-Sakauye to identify and make recommendations on improving how judicial branch entities prevent and address harassing, discriminatory, and inappropriate workplace conduct. The group plans to solicit feedback from judicial officers and judicial branch employees, as well as review examples of policies from the federal judiciary, state Legislature, and other government entities. The group expects to release recommendations, including a new rule of court with options for local implementation, for comment later this year. Watch

San Joaquin’s Community Supervision Court Project: The council heard from court leaders in San Joaquin County and graduates of the county’s collaborative justice programs. The court’s project targets defendants with a high risk of reoffending and uses strategies such as court-employed compliance officers and an agreement with local police to have two of its officers help monitor participants. The San Joaquin court reported that its recidivism rate for drug court participants was only 7.2% during fiscal year 2017–18, much lower than the statewide average that ranges from 40% to 80%, depending on the jurisdiction. In addition, the county’s 5-year average for fatalities due to DUI accidents has decreased 38%. The project is one of 50 programs supported by the statewide Court Innovations Grant Program, which promotes court innovations and efficiencies. Watch

New Rules for Capital Habeas Corpus Proceedings: The council approved new and amended rules of court and forms to govern the filing, hearing, and adjudication of death penalty-related habeas corpus petitions in the superior courts and appeals related to those superior court decisions. The new rules become effective Apr. 25, 2019, and help fulfill the council’s rule-making obligations under Proposition 66. Watch