Former California Supreme Court Justice John A. Arguelles, a member of the Class of 1954, died at his home on April 10. He was 94.

Arguelles was the first UCLA Law alumnus to serve on the state’s highest court and only the second Hispanic Justice on the court.

A highly regarded jurist, Arguelles was born in East Los Angeles in 1927. As many children did during the Great Depression, he held odd jobs, including selling newspapers on a street corner, to earn money that would help support his family. He later went to Garfield High School, where a quote from President Garfield inscribed along the school’s proscenium archway made a deep impression on the young Arguelles.

“The inscription read,” recalled Arguelles in an interview with UCLA Law students last month, “ ‘There is no American youth, however poor, however humble, orphaned though he may be, who may not rise through all of the grades of society and become the crown, the glory, the pillar of his state, provided he have a clear head, a true heart and a strong arm.’”

“It’s a wonderful quote, and I tried all my life to live by it.”

After graduating from high school in 1945, Arguelles served in the U.S. Navy. Soon after his honorable discharge, Arguelles was able to take advantage of the G.I. Bill to become a Double Bruin, first earning a B.A. in economics from UCLA and then enrolling in one of UCLA Law’s earliest classes.

Arguelles was admitted to the State Bar in January 1955 and set up a private practice in East Los Angeles. In 1957, he was one of the founding members of the Mexican American Bar Association of Los Angeles.

His early days of practice were difficult, but Arguelles considered them the root of his later professional success.

“If a client could afford it,” said Arguelles, “they’d go to a big firm downtown. If you were blue collar, you'd go to someone more affordable. And if you were really hard up, you'd probably go to someone like me!”

“But I was very fortunate,” he continued. “I wound up representing two state associations before the state legislature, the Pacific Coast Quarter Horse Racing Association, and the California Association of Podiatrists. And as a result, I made appearances in Sacramento before legislative committees of both the Senate and the assembly, and those connections attracted the attention of the California Attorney General Pat Brown.”

It was those connections, and his success as a solo practitioner and as a member of the City Council in Montebello that led to his appointment to serve as a Judge of the East Los Angeles Municipal Court by then-Governor Brown.

Arguelles quickly earned a reputation for his steady disposition, even-handed approach to trials and sentencing, and the highly efficient administration of his courtroom. Attorneys described him as courteous and gentlemanly and gave him the nickname “The Cardinal.”

He was also known as thoughtful counselor to community leaders and political figures on both sides of the political aisle. These qualities led to judicial career that thrived under both Democratic and Republican administrations.

In 1969, after six years on the municipal court, Arguelles was appointed by Governor Ronald Reagan to serve as a Judge of the Los Angeles Superior Court, a seat he held for 15 years, after which Governor George Deukmejian elevated him to Associate Justice of the California Court of Appeal.

And, finally, he was named by Governor Deukmejian as an Associate Justice of the California Supreme Court, beginning his term in March, 1987.

After retiring from the bench in 1989, Arguelles became Of Counsel for the law firm of Gibson, Dunn & Crutcher, and served as an arbitrator and mediator.

Along with his jurisprudence, Arguelles’s professional legacy included his leadership of commissions formed to address crucial problems in policing and access to justice. The first was a blue-ribbon committee of judges and other legal figures to study the language needs of non-English speaking persons that confront the California legal system.

The recommendations of that commission were adopted, and California became, and remains to this day, a model state for interpreter and language access in the Civil and Criminal Justice System, with court interpreters representing spoken languages such as Spanish, Vietnamese, Mandarin, Cantonese, Korean, Punjabi, Russian, Arabic, Farsi, and Tagalog, along with more than 50 court-certified and trained sign language interpreters.

“That report was the capstone in Justice Arguelles’s cathedral,” says Judge Manuel Ramirez, the Presiding Justice of the California Court of Appeal, Fourth District, and one of many later Mexican American judges to have regarded Arguelles as a personal mentor and a pathbreaker for his own career. “What a remarkable man. A unique and elegant human being.”

In 1991, Arguelles served alongside Warren Christopher on the Independent Commission on the Los Angeles Police Department formed by Mayor Tom Bradley in the wake of the beating by Los Angeles police officers of motorist Rodney King. The commission was created to conduct a full and fair examination of the structure and operation of the LAPD, including its recruitment and training practices, internal disciplinary system, and citizen complaint system

Arguelles was honored twice by his alma mater, with the 1987 UCLA School of Law Alumnus of the Year award, and, in 1989, UCLA’s Professional Achievement Award.

In 2003, Arguelles was honored as Judge of the Year by the Orange County Hispanic Bar Association.

Arguelles was preceded in death by his wife of 58 years, Martha. He is survived by his daughter Jeanine Arguelles; son and daughter-in-law, Evan and Kathy Arguelles; and daughter Andrea Arguelles. He is also survived by four grandchildren and a great-grandson.

The Arguelles family has requested that, in lieu of flowers, those who wish to honor and remember Justice Arguelles make a donation to The California Supreme Court Justice John A. Arguelles Scholarship at UCLA School of Law. The scholarship aims to make UCLA Law more accessible for leaders in the Hispanic Community.

Last month, in his final interview, Arguelles stressed how meaningful the establishment of the scholarship named for him was. “This gives me an opportunity to thank the taxpayers of California and the institution of UCLA for enabling me to have that wonderful education,” he said. “I owe everything to that education, and I couldn't have done it without them.” 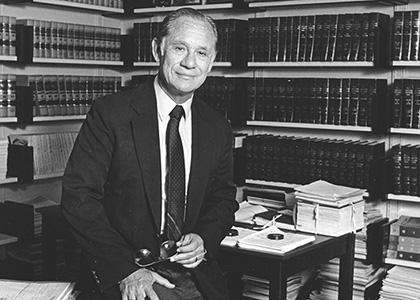