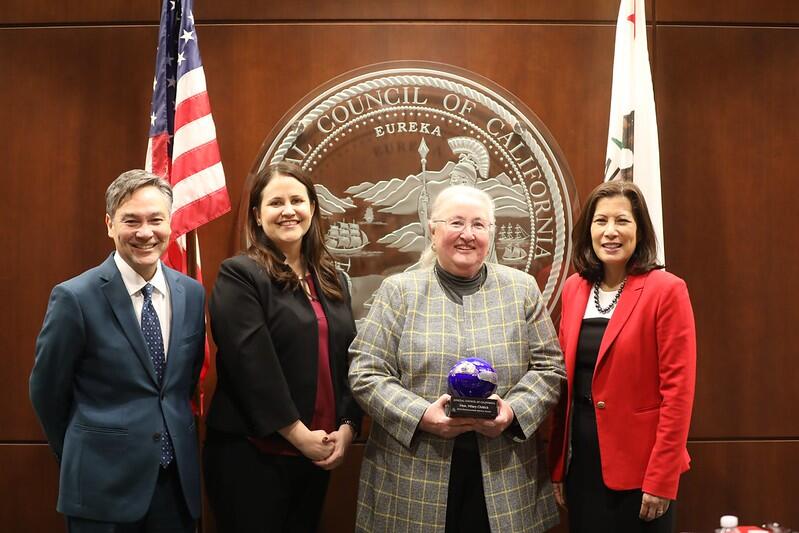 The Judicial Council of California presented this year’s Distinguished Service Awards and Aranda Access to Justice Award on November 14, 2019.

This year’s award recipients are:

As co-chair of the Tribal Court-State Court Forum, Justice Perluss championed access to justice for California’s tribal communities and helped strengthen relationships between local, state and tribal justice institutions. He was instrumental in the forum’s work to improve the safety of domestic violence victims by ensuring tribal court restraining orders were properly enforced. Justice Perluss’ other branch initiatives include creating an expedited jury trial program to quickly resolve smaller civil cases and ensuring new rules and forms related to Prop. 66 promote equal access to justice. Justice Perluss became an appellate justice in 2001 after serving two years as a Los Angeles County judge. In 2003, he was appointed presiding justice of Division Seven. He clerked for U.S. Supreme Court Justice Potter Stewart and was a partner with law firm Morrison & Foerster.

The first female presiding judge in Fresno County history, Judge Chittick helped create new court models that offer treatment and prevention to offenders instead of imprisonment or fines. She has presided over Fresno’s mental health, veteran’s treatment and drug courts, and helped drive the development of a dashboard that provides real-time drug treatment options. Judge Chittick began her law career as a Fresno deputy public defender, then rose to become a named partner at law firm Gilmore, Wood, Vinnard, Chittick, and Magness. She was appointed to the bench in 2002 and served as presiding judge of the Fresno court from 2007-2008.

This year is the 26th year of the Distinguished Service Awards, which recognizes people and organizations for their extraordinary leadership and contributions to the administration of justice in California.

In partnership with the Judicial Council and the California Judges Association, the California Lawyers Association announced that Judge Carol S. Brosnahan of the Alameda County Superior Court is the recipient of its 2019 Aranda Access to Justice Award. The award honors a judge demonstrating a long-term, tireless commitment to improving, and promoting fairness and access to, the courts, especially for low-and moderate-income Californians.

Judge Brosnahan is celebrating her 40th year on the Alameda County bench, where she operates the county's behavioral health court and has been referred to as a "grass-roots" judge, who renders fair rulings with integrity, and without bias based upon socio-economic status or any other non-relevant factors.