VIA WEB CONFERENCE—The Judicial Council on Friday approved a plan to distribute $25 million to help trial courts address case delays caused by the COVID-19 pandemic, the remainder of $50 million included in the 2020 Budget Act. The council will allocate the $25 million based on each court’s workload not disposed of during the pandemic period compared to the same period in 2019.

“The trial courts should be recognized for the work they performed during this challenging time—it was no small task,” said Judge Jonathan Conklin, chair of the council’s Trial Court Budget Advisory Committee. “The data does confirm courts are doing their best to actively resolve cases, but has also confirmed a significant backlog due to the impact of COVID on day-to-day operations.”

The council also voted to require trial courts to report at least quarterly on their progress in reducing their COVID-19 backlogs and on how they spend the funding. Watch

Ability-to-Pay Program to Help Low-Income Court Users
The council received a report and demonstration of an online pilot program enabling low-income litigants to request reductions in traffic infraction fines and fees remotely without coming to the courthouse. Since its launch in April 2019 through Nov. 1, 2020, nearly 11,000 ability-to-pay requests have been submitted by roughly 7,000 litigants across five pilot courts. More than 75% of the requests were approved, resulting in more than $2.8 million in reduced fines and fees.

The council’s Administrative Director Martin Hoshino added that the practice of using fines and fees, rather than sustainable funding sources, to fund government services is a practice that built up across the nation over decades. The ability-to-pay program is an example of how to move away from this practice and toward more sustainable funding models.

“We got hooked on using fines, fees, and assessments as a way to fund vital government services,” said Hoshino, who served on a national task force to reform the practice. “We’ve gotten to a point of stacking these fines and fees on top of people, and we’ve created nothing short of a debtor’s prison. That should not be happening. This tool will help us address that.”

The council approved plans to expand the program beyond ability-to-pay determinations to handle additional functions, such as requesting a hearing date, and requesting an online trial by written declaration. Watch

Voice-to-Text Language Services Outside the Courtroom: The council received a report and demonstration on the use of voice-to-text technology at locations outside the courtroom, such as court filing and service counters and in self-help centers. The new technology includes a QR code app similar to those used by restaurant patrons to access menu information via a smartphone photo. The council agreed to develop a pilot project in one appellate court and six trial courts to help test and expand the service for the public. Watch

Report on California Courts’ Self-Help Centers: The council received a report finding that funding for court self-help services substantially increases access to justice for the public. The funding enabled courts to expand self-help services to more case types such as landlord-tenant, consumer debt, and guardianship cases. The report also found resolving litigants’ issues and completing their forms via court self-help services, rather than in the courtroom, leads to quicker case resolution with less expense.

Legislative Priorities: The council approved its legislative priorities for the upcoming year. Priorities include securing needed judgeships, improving court efficiency, and advocating for investments in the judicial branch, including for projects seeking to expand online access and remote proceedings. Watch

Newest Council Member
Today’s council meeting was the first for Senator Tom Umberg, the new chair of the state’s Senate Judiciary Committee. He succeeds the former chair of that committee Senator Hannah-Beth Jackson, who served on the council for the past six years. Council membership includes one member from each house of the Legislature. 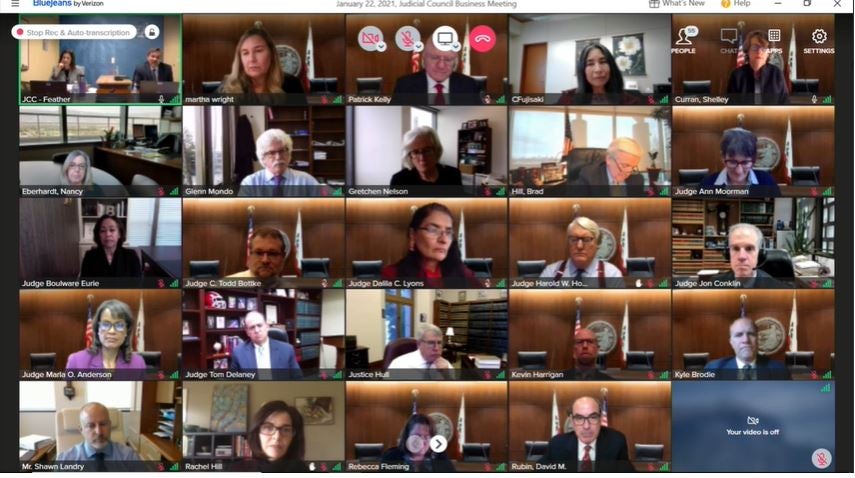