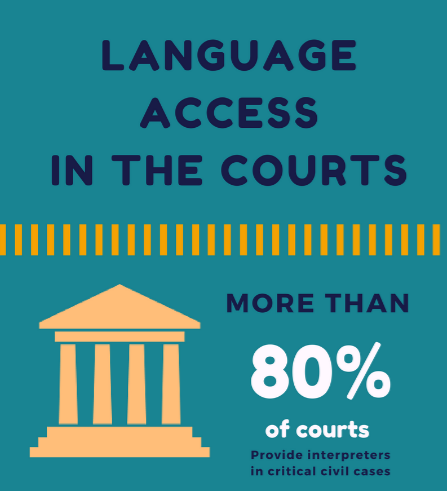 Did you know that Spanish is the most requested language by limited-English-proficiency court users?

Two reports prepared by the Judicial Council and the National Center for State Courts tout the significant expansion of language access services by trial courts in the state, including the expansion of court interpreters in priority civil cases and in non-courtroom proceedings. The reports also highlight other achievements, such as the addition of multilingual signage throughout courthouses and multilingual information on courts’ websites.

While trial courts embrace the council’s Language Access Plan (LAP), limited resources and funding prevent some courts from implementing all goals listed in the plan.

I’m enormously proud of the progress that our courts have made across the state in ensuring access to justice for all, regardless of ability to speak English –– and I’m grateful for all the support from trial court judges, lawyers, legislators, interpreters, and the public. But we have a lot more work to do. With more resources we can continue expansion of language assistance in all proceedings and make sure our courts are ready to help everyone, regardless of what language they speak.

Below are some of the findings from each report: