On Jan. 1, hundreds of new laws go into effect, including many that will protect the public and improve access to justice for all Californians. Here are a few worth noting.
By Merrill Balassone

In 2023, the work begins to implement the Community Assistance, Recovery, and Empowerment (CARE) Act program, which seek to address the needs of people living with untreated mental health and substance abuse challenges. Seven courts will launch programs by Oct. 1 as part of the first cohort—San Francisco, Riverside, Orange, San Diego, Stanislaus, Tuolumne, and Glenn counties. While CARE is a civil program, criminal courts will also be able to refer those with misdemeanor charges to a CARE program, to help connect individuals with services including mental health and housing services. All individuals referred to CARE will have the right to be represented by an attorney at all stages, regardless of their ability to pay.

Lunar New Year, Armenian Genocide Remembrance Day, and Juneteenth will all be state holidays in 2023. The Judicial Council supported the bill to make Juneteenth a California state holiday, commemorating the end of slavery in the United States. Beginning in 2023, state courts will be closed to the public on June 19 in honor of Juneteenth.

The Judicial Council sponsored AB 1981, which requires jurors be reimbursed for mileage incurred traveling both to and from jury service (current law only allows reimbursement for travel to a court). It also provides jurors with free access to public transit or reimbursement of up to $12 per day in public transit costs. The law will also allow the council to conduct a pilot program in six California counties, to study the impact of increased juror pay on participation in jury duty.

Female consumers are no stranger to paying a premium for items—often toiletries like shampoo or razors—simply because they are marketed to women and girls. AB 1287 bans companies from charging a different price for goods based on the gender of those they are marketed toward. It authorizes courts, in granting injunctions, to impose civil penalties up to $10,000 for the first violation, and up to $1,000 for each subsequent violation, with total civil penalties not to exceed $100,000.

A new law meant to target racial bias in court proceedings, AB 2799 limits the use of rap lyrics and music videos as evidence during criminal trials. California courts must consider "research demonstrating that the introduction of a particular type of expression introduces racial bias into the proceedings," as well as evidence rebutting those findings. Performance art, visual art, poetry, literature, film, and other media is also included under the law.

CA is the 1st state to ensure creative content - like lyrics & music videos - can't be used against artists in court without judicial review.

— Office of the Governor of California (@CAgovernor) September 30, 2022

More Californians will be able to seal past criminal histories from record checks under SB 731. Those who qualify must have completed all terms of their sentence, with no new offenses. The relief is not available for those convicted of serious and violent felonies, or who must register as sex offenders.

Other Laws of Note: 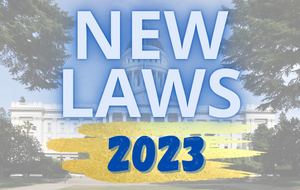