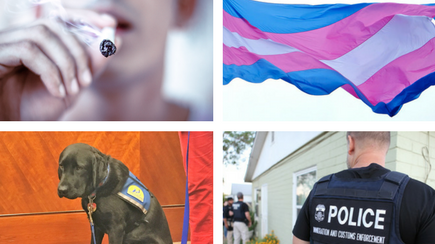 In 2018, a number of new laws were created in the hope of expanding the rights of Californians through the court system.
By Merrill Balassone

Each year, hundreds of new laws are passed in California. In 2018, a number of new laws were created in the hope of improving access and expanding the rights of Californians through the court system. Here are a few of them: 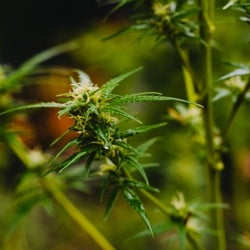 With Legal Marijuana, A Fresh Start
Proposition 64 legalizes the adult use of recreational marijuana, while also giving thousands of Californians a chance to clear past pot-related criminal convictions.

So far, nearly 4,900 people have petitioned county courts to have their sentences shortened or their offenses erased or reduced, according to data compiled by the Judicial Council. Those include 365 petitions to have juvenile records expunged.

Prop. 64 also provides “a more therapeutic approach” for juvenile offenders, Couzens said, prescribing counseling programs and community service rather than jail sentences or fines. (The measure only extends the use of legal marijuana to those 21 or older). “It’s designed to be more of an intervention than it is a penal consequence,” Couzens said. 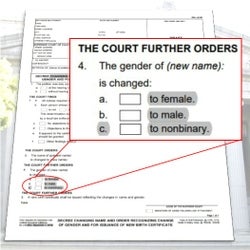 A draft Judicial Council form to designate gender as "nonbinary."

A New Gender Identity
California became the first state in the nation to pass a law allowing the choice of a third “nonbinary” gender option on driver’s licenses, ID cards and birth certificates.

Beginning in September, people will be able to file petitions with their local court to make the change, removing a previous requirement that a doctor give proof of gender transition treatment.

Reforming Juvenile Justice
Senate Bill 394 guarantees California minors serving life sentences a parole hearing by their 25th year behind bars, after the U.S. Supreme Court ruled that such sentences for children are unconstitutional.

The law is one of many that will have wide-ranging implications for the juvenile justice system in California. Another, Senate Bill 395, requires a child under 15 consult a lawyer (either in person, by phone or via video conference) prior to being interrogated by police or waiving their Miranda rights. And two other bills require records be sealed if a juvenile was arrested on a serious or violent offense that was reduced to a misdemeanor, or for those arrested but not convicted of a crime.

"Youth may look and act like adults, but they are not adults on the inside, because their brains are not fully developed until about age 25. California is legislating that distinction with these bills," said Judge Carolyn Caietti of the San Diego County Superior Court, a member of the Council's Family and Juvenile Law Advisory Committee. “The charge of juvenile justice is different from the adult system. The focus has always been on rehabilitation of the minor and determining what can we do to improve the outcome for youth so we don’t have repeat offenders.” 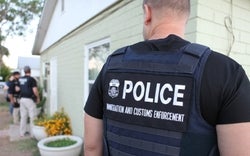 Immigration Enforcement—A number of laws aim to protect undocumented immigrants by limiting how local authorities can aid federal immigration officials. Chief among them: California’s designation as a “sanctuary state” which requires courts to have policies limiting what they can share with immigration officials. Assembly Bill 493 will also protect victims or witnesses to a crime from being detained or turned over to immigration agents without a warrant.

Therapy Dogs—Some prosecution witnesses, including child witnesses, may now be accompanied by a dog trained to give emotional support on the stand during testimony. Below, watch San Francisco Superior Court’s newest courthouse dog, Nemo, being sworn in to serve: