Watch the video or read the transcript of her remarks below:

But as we, the judiciary, move forward, we are fully aware of the consequences of the shelter-in-place orders, the education gaps, the shuttered businesses, the disruption to government services, and the human toll therefrom. It seems more visceral actually because we are watching Russia’s war on Ukraine.

I am speaking to you today from the first in-person Judicial Council meeting in approximately two years.

That my remarks are remote reflects the uncertainties and disruptions we still face as we recover together, respectfully and cautiously. Photos: Top, Judicial Council members at the first in-person meeting since the start of the pandemic; bottom, in the audience at the Chief Justice's State of the Judiciary address.

Throughout the past two years, the judiciary has been resolute and resilient in our commitment to access, fairness, equal justice.

I became Chief Justice of California about 12 years ago during the Great Recession. And the practices we implemented then—that is, to strive to learn more, to reconsider our old practices, to be more transparent and accessible—it helped guide us through the pandemic.

During the Great Recession, we evaluated, we streamlined, we reduced costs, and we worked with the Governor and the Legislature to focus on the critical need for justice in California, and in the last eight years we have been provided with even greater resources.

And what have we done with those resources?

My late father would have loved our self-help program. Born and raised in the territory of Hawaii, he was removed from elementary school to care for his 10 brothers and sisters. He was the family cook.

He never returned to school after that. He joined the Army after the attack on Pearl Harbor, and it was in the Army that he learned the skill that would support his future family: He became a mechanic.

And he never lost his love for education; he always had a book, and if you open the book, you would see his computations, because it was not just any book, it was always a book on science or math.

And this was eons before YouTube and the internet; this was the day of the Encyclopedia Britannica and the library card.

My father was an autodidact, a do-it-yourself kind of person, and he had every car and household item gizmo’d.

Now, it’s true, my parents didn’t really have household appliances, because they relied on the chore power of their four children, but everything we did have was jerry-rigged to operate.

So every single family car was a Frankenstein Chitty Chitty Bang Bang car on wheels, and one car my father hand-painted the color turquoise.

During and after the Great Recession, we also studied fines and fees and bail, and the impact it has on our most vulnerable populations:

Then, in 2020, the pandemic crashed into our lives, and we didn’t flinch. We pivoted quickly—we adapted and we reinvented ourselves in the same way we did in the Great Recession to serve everyone.

Because everyone was going through the shelter-in-place, the education gaps, the shuttered businesses, but also impact to hospitals, viral outbreaks in jails and other institutions, social distancing, masks, vaccinations, surges, variants, and the never-ending workday and workweek.

But with your support, we were able to adopt the mindset that worked so well for us in the Great Recession:

We didn’t wring our hands, we didn’t complain, we just kept going and doing.

We used this authority very carefully. One of the first things we did was to initiate a statewide halt on all evictions. And we did so for several reasons, including that we as a court needed to shrink our in-person footprint so as not to become a superspreader. But we also couldn’t see evicting people during a time of shelter-in-place orders while some people were losing their incomes. Eviction is more than just being moved, it’s a life changing event.

My family was evicted via eminent domain when I was nine years old, and it was life-defining, it separated our extended family.

We did, however, as you know, roll back those orders once the Legislature and the Governor were better able to comprehend a plan that would avoid a statewide eviction crisis.

The judiciary, via the Judicial Council in those early days, we met in emergency sessions remotely. And we promulgated the most novel and innovative, never heretofore in the judiciary of orders, including the order that permitted the entire judicial branch to work remotely.

Within that 2020 year, we didn’t just react or stand still, we continued to lead. I asked Judicial Council members Justice Carin Fujisaki and Justice Louie Mauro to find out how the courts could help to end the crisis of homelessness. And with other dedicated jurists, they met remotely and prepared a report with four action areas.

These action areas include creating a plan for youth and non–minor dependents in foster care, so they can avoid housing insecurity. To leverage technology to better use resources and access to legal services, and to create a statewide funded plan for a full-scale legal representation for indigent people in unlawful detainer residential courts.

I urge you to read the report and to act on some of those action items.

Just last year, in 2021, the judiciary, looking to the future as we must, that post-pandemic world, I asked Judicial Council member Justice Marsha Slough and another group of dedicated jurists, lawyers and court staff, to look at what we learned during the pandemic, and to take the lessons forward as we move into the endemic.

The workgroup also met remotely with many court users representing over 46 different groups of people. And the major takeaway from the workgroup is the public expects to access their courts online. Technology, we know, is not the cure-all. It has is its own issues. But we learned from the workgroup that overall greater access was made because people who didn’t have to incur transportation cost and childcare cost, could still have their day in court.

We learned that people in collaborative courts, in mental health courts, or in drug courts, could still have their day in court without missing a session.

We found that school-aged children and guardians with non-traditional work schedules could also have their day in court.

And our most vulnerable populations, that is survivors of domestic violence and elder abuse, were also able to appear remotely.

The workgroup also found for that subgroup of cases that went almost entirely remote, and that is juvenile dependency and juvenile delinquency, those case types stayed current in the pandemic and even resolved their backlog.

One family court judge shared with us a story from a child who appeared in her court, who said that she preferred going online rather than going into a big courtroom where it seemed like people were starting at her. She liked being in a Zoom box, the same size as everyone else's Zoom box. So in other words, in a child's words: "We are all equal."

The workgroup continues its good work, now focusing on jury service. And there are recommendations to have state-funded increases in juror pay, and to have jurors complete the questionnaires and the hardship applications online.

We believe that those improvements will create a diverse, broader prospective jury pool. 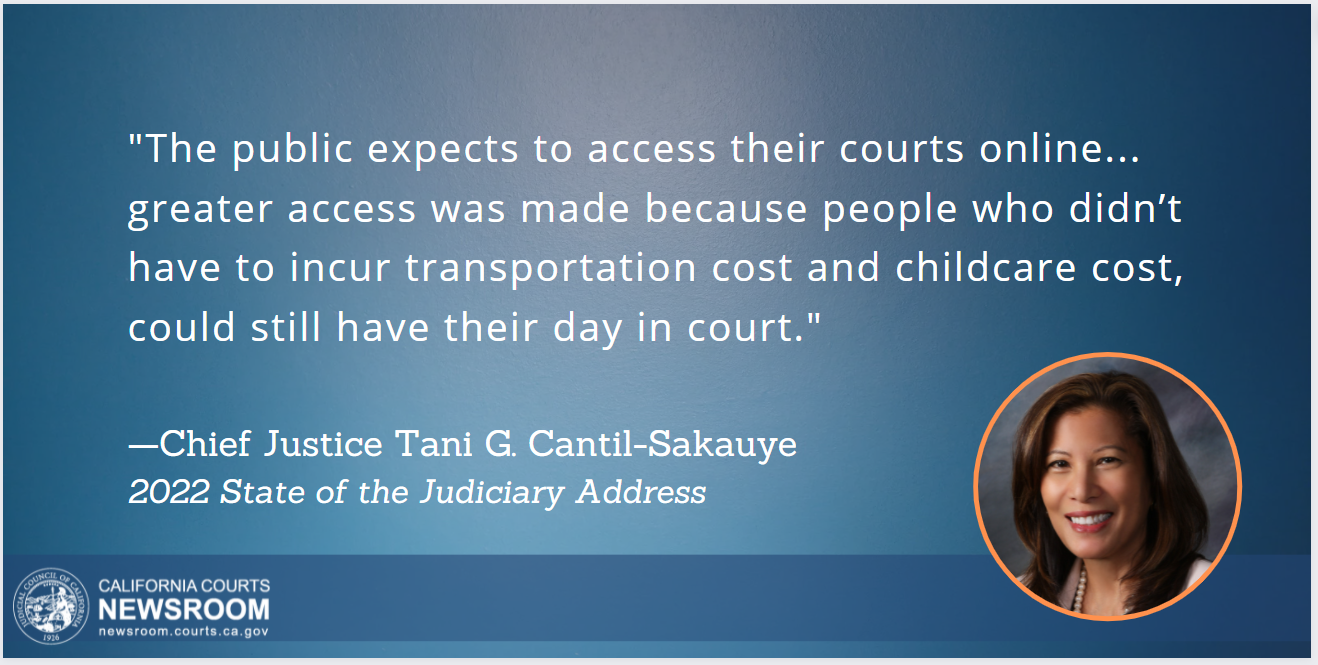 The last 12 years in California have been book-ended by the Great Recession, and the pandemic. But it has provided a creative, transformative time for changes and opportunity that the judicial branch enacted.

When we three branches work together, we demonstrate how a healthy democracy works. I’m proud to be a Californian. When I meet justices and justice stakeholders from other states and other countries, I’m proud to say I’m from California.

“Yes,” they say, “you have earthquakes.” We also have challenges like everyone else. We have homelessness, we have justice for all, we have education equity, labor challenges, and climate changes issues.

But at the same time, I know that if the judiciary holds true to our core values of fairness, equity, and access to justice, everyone will prevail, and everyone will prosper.

Thank you for listening."