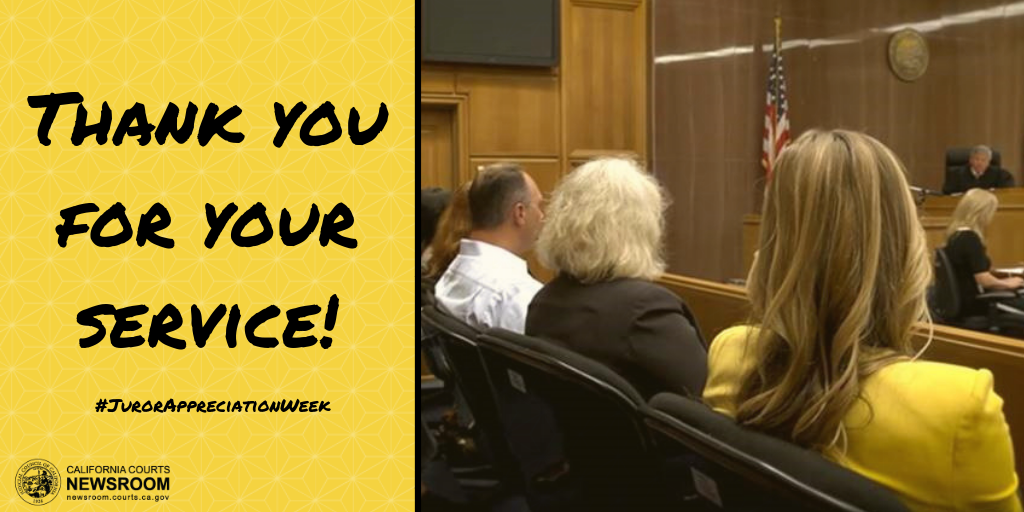 Each year, millions of Californians serve their communities and put into practice a fundamental American ideal of justice: the right to trial by jury. Juror Appreciation Week is one way the courts thank these citizens for fulfilling their obligation and making the justice system work.

In addition, following are a few more ways California courts show their appreciation for jurors by making the civic right and obligation of jury service more convenient for its citizens all year round.

One Day or One Trial Jury Service
California has one-day or one-trial jury service. If not chosen for a jury panel after one day of service at the courthouse, a juror’s service is done for at least one year. If you are selected to serve on a jury, after the trial is over your service is also completed for at least a year and often longer. In fact, the majority of people who report for jury service serve for just one day.

One Postponement Allowed
California courts allow summoned jurors to postpone jury duty at least once. Rule 2.1004 of the California Rules of Court states that as long as the deferral is made under penalty of perjury in writing and in accordance with the court's local procedure, the jury commissioner should not require the prospective juror to appear at court to make the request in person.

In addition, many courts have added new technologies to streamline jury service, such as check-in kiosks, online and phone check-in, and updates via text message.