Diversity on the California bench has slowly but steadily increased, according to a legislatively mandated annual report released today by the Judicial Council.
By Blaine Corren

Over the last 11 years, diversity on the California bench has slowly but steadily increased, according to a legislatively mandated annual report released today by the Judicial Council. The report contains demographic data on the race/ethnicity, gender, gender identity, sexual orientation, and veteran and disability status of California state justices and judges on the bench as of December 31, 2016.

Government Code section 12011.5(n) requires the Judicial Council to collect and release aggregate demographic data on California state justices and judges by March 1 every year. This is the eleventh year that the information has been collected and released. Responding to the questionnaire is entirely voluntary for judges. On that basis, the data reported reflects the responses of only those judicial officers that provided demographic data.

Gender
The data show a trend toward an increasing percentage of female trial court judges in 2016. Women now represent 33.5 percent of superior court judges, compared to 26.8 percent in 2006, continuing a steady upward trend over the past 10 years.

Race/Ethnicity
The data also show changes over the past 11 years in the percentage of justices and judges reported in the following race/ethnicity categories:

Veteran and Disability Status
In addition, this is the third year that the study includes data on veteran and disability status. These questions were first asked of justices and judges who were new to the bench during the 2014 calendar year, although judges appointed before this date are free to update this aspect of their demographic profile as well. Of the 360 trial court judges responding to the question about their status as a veteran, 31 respondents (9%) indicated they have served in the military. Of the 363 judges responding to the question concerning their disability status, 8 judges (2%) indicated they have a disability. 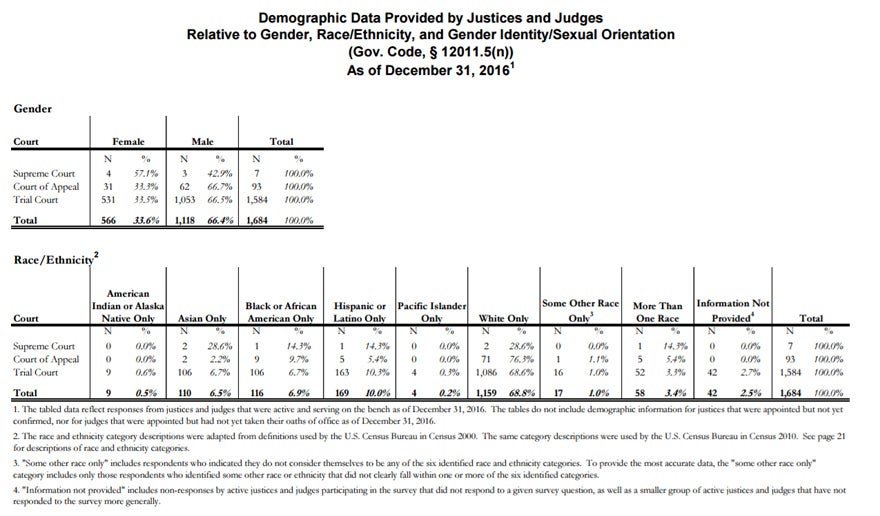