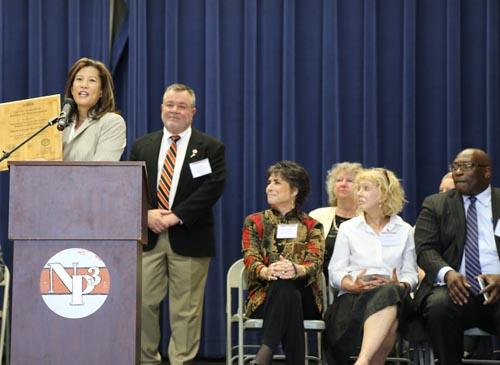 More than 50 California public elementary, middle, and high schools are being recognized with this year’s Civic Learning Awards.

Co-sponsored by Chief Justice Tani Cantil-Sakauye and State Superintendent of Public Instruction Tom Torlakson, the awards celebrate public schools’ efforts to engage K-12 students in civic learning and identify models that can be replicated in other schools.

Schools receiving Awards of Excellence, the highest level, will receive a visit from the Chief Justice. They are:

Schools receiving Awards of Distinction are:

“When I first became a judge, I was surprised by how often I needed to explain the independent and impartial role of the courts,” said Chief Justice Tani G. Cantil-Sakauye. “As Chief Justice, I decided to make civics and civic engagement a priority. The schools receiving these awards have made it a priority as well, and are helping their students become the future leaders and protectors of our democracy.”

“Civic education plays a critical role in preparing our youth to be active and informed community members, participate in our democracy, and make a difference in the world,” added State Superintendent of Public Instruction Tom Torlakson. “The number of schools taking part in these efforts is truly inspiring and exemplifies the importance we should place on civic education.”

Launched at the 2013 Civic Learning Summit, the awards program is part of the Chief Justice’s civic learning initiative and partnership with the State Superintendent of Public Instruction.