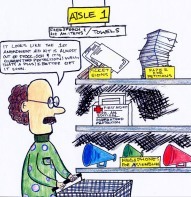 Students from elementary, middle, and high schools nationwide were invited to submit cartoons depicting any of the First Amendment freedoms: of speech, of the press, of religion, of assembly, of association, and of petition.

See the complete list of recipients and view their artwork at www.courtsed.org/cartoon_contest_2013.htm.

The First Amendment Cartoon Contest was announced on Bill of Rights Day on December 15, 2012. Criteria for judging are based on students’ understanding of the First Amendment, creativity, and artistic merit. There were 783 submissions.

The Judicial Council and Administrative Office of the Courts, in partnership with the Constitutional Rights Foundation and the California State PTA, organized the contest to increase student understanding of the Bill of Rights and the United States Constitution, as well as to help educate youth about the role of the judicial branch and their role as future jurors.

Law Day is a national day to celebrate the rule of law and its contributions to the freedoms Americans enjoy, as well as the essential role informed citizens play in a democracy. To see other law-related education programs of the California judicial branch, go to www.courts.ca.gov/programs-lawrelated.htm.