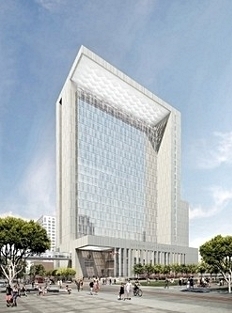 Hundreds of construction workers and dignitaries gathered April 20 in downtown San Diego to celebrate a major milestone: the ceremonial topping out of the 22-story courthouse rising across the street from one of the three buildings it will replace.

The last steel beam was lifted 400 feet to the roof, where was bolted it into place. It carried dozens of signatures from VIPs and workers, and a small Torrey pine that will be replanted later at a state park.

Slated for completion in late 2016, the new courthouse will house 71 courtrooms and will vastly improve access to justice for central San Diego residents.
Loading...