While the model has helped equalize funding gaps across counties, chronic underfunding of the judicial branch has complicated its rollout.
By Merrill Balassone

Four years ago, court leaders came together with the Judicial Council to create a fairer and more transparent way to distribute budget funds to the state’s 58 trial courts.

A group that included judges and court executive officers developed the new funding formula—called the Workload-based Allocation and Funding Methodology (WAFM)—that determines the money a court receives based upon its workload.

While the model has helped equalize funding gaps across counties, chronic underfunding of the judicial branch continues to complicate its implementation. This year, the branch received no new funding, so extra money for courts facing increased demand for services has come at a cost to others.

The Judicial Council uses the Workload-based Allocation and Funding Methodology (WAFM) to calculate how much funding each of the state’s 58 trial courts will receive annually, based on the workload at each court.

There is also a minimum level below which a court’s funding cannot fall—for the state’s smallest courts with as few as two judges, that’s $750,000. Statistics from the U.S. Bureau of Labor factor in the differences among courts in costs of employee salaries.

No. While the majority of a court’s budget is determined this way, many court programs have their own separate funding sources. Programs that are not dependent on WAFM funding include dependency counsel, court security and interpreters, among others.

Trial court funding was once a county responsibility, which led to wide funding disparities depending upon how each of California's 58 counties chose to fund their courts. When the state took over trial court funding in 1997, money was first divvied up based upon how courts had historically been funded by their counties. So trial courts in richer, more populous counties continued to be well-funded while courts in poorer areas had as little as 40 percent of their budget need met, even as court filings in some of those same areas rose dramatically. 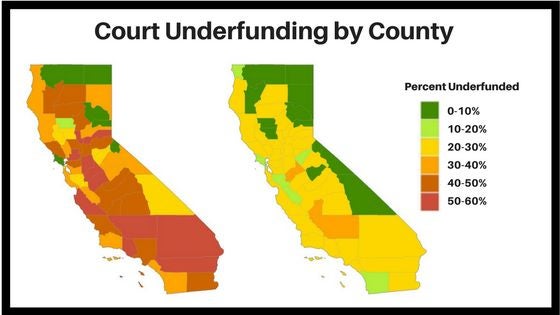 Before the judicial branch implemented the Workload-based Allocation and Funding Methodology (2013-14, left) some trial courts were underfunded by as much as 60%. By 2017-18 (right), the new formula had helped equalize funding gaps.

One of the workgroup’s recommendations in its final report was to develop a funding approach that would result in a fairer distribution of funds among the trial courts. Building upon that recommendation, the Judicial Council’s Trial Court Budget Working Group formed a sub-committee that included seven presiding judges and 9 court executive officers from counties of varying size, location and funding need. The sub-committee met over the course of five months, and in April 2013, the Judicial Council approved its recommendation to create WAFM.

The council established a five-year transition period to avoid unmanageable shifts in funding. This year, WAFM determines about 70% of a court’s allocation, with the rest determined by how a court was historically funded.

The judicial branch is constantly reviewing the WAFM model. On July 27, the council approved a proposal to adjust the weights given to each type of case that determines a court’s workload, as new state policies have changed how the courts do business. Proposition 47, for example, has increased workload for court staff and made some felony and misdemeanor case types more complex.

The council created a process that allows courts to ask for changes to the formula, several of which are being considered. A council sub-committee will meet over the next several months to address proposals to improve the funding model for the 2018-2019 fiscal year.