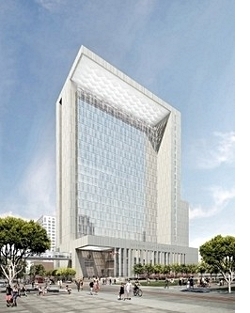 SAN FRANCISCO— The State Public Works Board (SPWB) today approved preliminary plans for the new San Diego Central Courthouse for the Superior Court of San Diego County. Largest of all the projects funded by Senate Bill 1407, the new facility will be located in downtown San Diego on 1.4 acres bounded by West C Street, Union Street, West B Street, and State Street.

“We are very pleased that the San Diego Central Courthouse project has cleared another important benchmark,” said Presiding Judge Robert J. Trentacosta. “This urgently needed replacement of our existing courthouse will offer litigants, court users, the public, and our judges and employees a safe and modern environment that will greatly improve access to our courts.”

The 22-story, 704,000-square-foot structure will house 71 courtrooms as well as space for public services, court administration, and secure holding of in-custody defendants. It will include a secure underground connection to the nearby San Diego Central Jail and a public circulation bridge to court and county offices in the adjacent Hall of Justice. Along with a new public park planned by the city on the current courthouse site, the new courthouse will complement the Hall of Justice and other buildings around it and help to shape the character of an emerging civic district in downtown San Diego.

The new building’s design, by the architecture firm of SOM, incorporates features historically characteristic of civic buildings, such as a podium, separation from the commercial realm, a large interior public space, and an identifiable crown, establishing continuity with the past in a contemporary way. It will be constructed with energy-efficiency and sustainability features enabling it to qualify for a LEED Silver rating from the U.S. Green Building Council. The design takes advantage of the region’s climate, employing sunlight to optimize interior day-lighting, and the new building will consume approximately 15 percent less energy than a code-minimum facility. The new building’s convenient location, in conjunction with the city’s planned redevelopment efforts, will promote pedestrian access and use of public transit.

Today’s SPWB approval marks completion of the preliminary plans phase and authorizes the project to proceed into working drawings. The new courthouse is expected to generate hundreds of construction jobs and thousands more jobs through indirect benefit to the local economy. Before the project goes to bid, currently scheduled for mid-2013, the project’s construction-manager-at-risk, Rudolph and Sletten, will perform outreach to ensure that local subcontractors and suppliers have the opportunity to participate in prequalification and bidding. All qualified subcontractors, lower-tier subcontractors, and suppliers will be considered.

The courthouse project was ranked as a “Critical Need” in the judicial branch’s capital-outlay plan, making it among the branch’s highest-priority infrastructure projects. It is funded by Senate Bill 1407, enacted in 2008 to provide up to $5 billion for new and renovated courthouses using court fees, penalties, and assessments rather than taxpayer revenues from the state’s General Fund. The building site was obtained at no cost to the state through a negotiated transfer of court facilities from the County of San Diego. The state Budget Act for fiscal year 2011–2012 contained significant cuts to the account that funds SB 1407 projects. Those cuts delayed some projects and resulted in construction budget reductions, mandated by the state Judicial Council in April 2012, for this project and all other SB 1407 projects.

More information about the San Diego Central Courthouse project, including architectural renderings, can be found on the California Courts website at www.courts.ca.gov/facilities-sandiego.htm