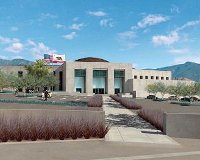 What: The public is invited to a groundbreaking ceremony for the new courthouse in Banning for the Superior Court of Riverside County, marking the start of construction of this long-awaited project.

Where: Banning City Council Chambers, 99 East Ramsey Street, Banning, California (map). Public parking is available at the lot across from the police station. The ceremony begins at the council chambers, and then the groundbreaking will take place at the new courthouse site on the northeast corner of the intersection of East Ramsey Street and Martin Street. The ceremony will be broadcast locally on Time Warner channel 10 and Verizon Fios channel 29 and streamed live from the City of Banning website.

Why: The event celebrates the culmination of more than five years of planning and design for the new six-courtroom, 68,000-square-foot courthouse to replace the current overcrowded Banning Courthouse. Scheduled for completion in fall 2013, the new courthouse will provide the necessary space for expansion and enhanced security, enabling the court to improve access and services. For more information, including an architectural rendering of the new courthouse, visit the project website at www.courts.ca.gov/facilities-riverside-midcounty.htm