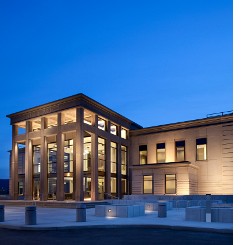 What: The program will include remarks and tours of the new courthouse.

Where: The new courthouse is at 2610 Riverside Drive in Susanville.

Why: The grand opening celebrates completion of five years of planning, design, and construction for the new 42,000-square-foot courthouse, which replaces three overcrowded and inadequate facilities. The new courthouse, with three courtrooms and a hearing room, provides enhanced security and more space, enabling the court to improve access and services. The project was completed under budget in May 2012.

Members of the public needing accommodation, such as an assistive listening system or a sign language interpreter, are also requested to contact Nancy Holsey at 530-251-8205, ext. 140, no later than July 27, 2012.