Appointed to the Los Angeles Municipal Court in 1978 by Governor Jerry Brown, she was the first Asian-American woman judge in the country
Cathal Conneely
415-865-7740 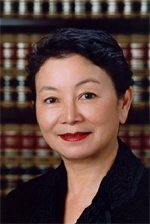 LOS ANGELES—Associate Justice Kathryn Doi Todd, of the Court of Appeal, Second  Appellate District, Division Two (Los Angeles), will retire from the bench on January 22, 2013, after 35 years on the bench.

Appointed by Governor Jerry Brown to the Los Angeles Municipal Court in 1978, Justice Todd was the first Asian-American woman judge in the country. Before her appointment, she conducted a general civil practice in Los Angeles, in Little Tokyo.

“Our branch is fortunate to have had many pioneers over the years that have brought fresh perspectives and diverse backgrounds to enrich our judiciary—Justice Kathryn Doi Todd is one such pioneer,” said California Chief Justice Tani G. Cantil-Sakauye. “She, and men and women like her, are the reason that our appellate bench has become more reflective of the communities we serve. With over four decades of service to our justice system as an attorney, judge, justice, and Judicial Council member, she has made significant contributions to the judicial branch on gender bias and fairness, foster care, appellate issues, and juvenile law. I wish her well in her future endeavors.”

Her colleagues on the Court of Appeal acknowledged her contributions. Administrative Presiding Justice Roger Boren commented, “When Justice Kathryn Doi Todd retires, she brings to a close 35 years of wonderful judicial service on behalf of the state of California. She has been my friend and reliable advisor for most of those years, as we have been together on the Superior Court of Los Angeles County, on the California Judicial Council, and, for more than decade, on Division Two of the Second Appellate District. Hers has been a career of excellence and caring wisdom. Her everyday insights and good humor will be sorely missed.”

In 1981, Governor Brown appointed her to the Los Angeles Superior Court where she served as presiding judge of the Juvenile Court from 1988 to 1989. She was appointed to the Court of Appeal by Governor Gray Davis in 2000.

“Having served on courts with Justice Kathryn Doi Todd for almost 35 years, I am saddened because the judicial system is losing a person of great intelligence, charm and wit, and I will no longer be working with a dear friend,” said Justice Robert Mallano, the presiding justice of  Division One of the Court of Appeal, Second Appellate District.

After being interned with her family during World War II, she returned to Los Angeles where she attended public school, graduating from Los Angeles High School in 1959. She graduated from Stanford University in 1963 with a degree in history, and then attended Loyola Law School on an academic scholarship, graduating with honors in 1970. She was honored as a Loyola Law School Distinguished Alumna in 2003.

Her colleague on the Court of Appeal, Second Appellate District, Division Two, Justice Victoria Chavez noted that, “Kathryn Doi Todd's retirement leaves a void that will likely be impossible to fill. She has carried the responsibility of being among the first women and ethnic minorities—in what was once a homogenous bench—with her usual intelligence, diligence, dignity and graciousness. She has been tireless in her commitment to the Japanese American Bar Association and has served as an excellent role model for those who have followed her. It has been a rare honor to have had the opportunity to serve as her colleague. Though we will miss Kathryn's presence—especially her laughter—her influence will remain.”

Justice Todd has served on various committees and organizations created to improve the administration of justice, including the California Judicial Council, the policymaking body for the state courts. She has also served as chair of the Judicial Council’s Appellate Advisory Committee and as a trustee of the California Judges Foundation and the Los Angeles County Law Library.

“The life and accomplishments of Justice Kathryn Doi Todd stand as a testament to Asian- Americans, women, and our entire community that no dream is too big and no goal is unattainable,” said Justice Judith Ashmann-Gerst, Court of Appeal, Second Appellate District, Division Two. “She went from a World War II internment camp to being the first female Asian-American judge in the country. While on the Second District of the California Court of Appeal, she has served with distinction, and has advanced the administration of justice as a member the California Judicial Council and as chair of the council’s Appellate Advisory Committee. I wish her a happy retirement and will miss working with her.”

On her retirement, Justice Doi Todd said, “It has been the greatest privilege and honor for me to serve as a judge for the past 35 years. I am so grateful to the colleagues and court staff who have made the court such a wonderful place to work. It was difficult to finally decide to retire, but I am looking forward to the next phase of my life.”