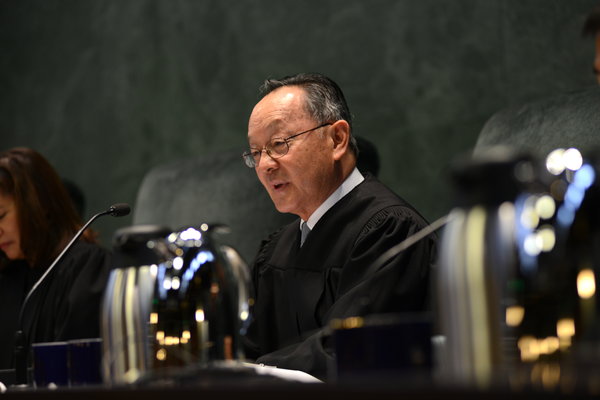 Justice Ming W. Chin today announced he will retire from the Supreme Court of California on August 31, capping a nearly 25-year career on the state high court.

Justice Chin is the court’s first Chinese-American justice and its longest-serving sitting member. He authored over 350 majority opinions and more than 100 separate opinions during his tenure, including a landmark decision that paved the way for spousal abuse to be used as a defense in murder cases. Justice Chin also joined the majority to strike down a law requiring minors to get permission from a parent or judge before having an abortion.

A nationally renowned expert on DNA evidence, Justice Chin gained recognition for his ruling while on the First District Court of Appeal that the statistical model used to match DNA evidence to the defendant was not yet generally accepted in the scientific community. Years later, he joined the high court majority to rule that DNA science was ready to be used as evidence in trial courts.

"I’ve had the honor and privilege to serve with three very different but spectacular chief justices,” Justice Chin said. “The judicial system has faced some major challenges in my time on the bench, but I believe the branch is now in a strong position. Justice Chuck Vogel once said my opinions are characterized by clarity and courage. If that is what is written about me in 50 years, I would be happy."

Said Chief Justice Tani G. Cantil-Sakauye: “I have long admired Justice Chin, and his loss to this court will be incalculable. He has been a valuable mentor who took me under his wing when I first became Chief Justice. Before he joined the bench, he spent years performing at the very highest levels of the legal profession and is an accomplished teacher and lecturer. He has been a leader in helping our courts embrace technology to expand access to justice to all Californians. His signature mix of intelligence, wisdom and practicality will be greatly missed.”

Said retired Chief Justice Ronald M. George: “Justice Ming Chin brought a breadth of experience to the state’s high court from his prior service as a prosecutor, civil litigator, and trial and appellate judge. He developed an invaluable expertise in emerging areas of science and the law, including DNA evidence. His contributions to judicial and legal education and his community service received well deserved recognition, as did his prior military service. Justice Chin also assisted the statewide administration of justice through his leadership positions on the Judicial Council and its committees, receiving its highest honor of Jurist of the Year in 2009.”

Justice Chin was appointed to the California Supreme Court by Governor Pete Wilson in 1996. He quickly gained a reputation for producing a prolific number of opinions—authoring six majority opinions in his first eight months.

“Ming Chin has been a model of judicial excellence deserving the highest commendation for his long and faithful service to California and the rule of law,” former Gov. Pete Wilson said. “His career has produced opinions and dissents that are strong statements of principle expressed with admirable clarity. They are also often stated with good humor and a collegiality that I'm sure his colleagues will miss. I have always taken pride in Ming's appointment. I hope that he will take as much pride in his performance as I have.”

Said retired Supreme Court Justice Marvin R. Baxter: “Justice Ming Chin’s professional career as a lawyer, trial judge, appellate justice, and member of the California Supreme Court has been outstanding. He leaves a lasting legacy in the law that few can match. His personal attributes are outstanding, and it was a great privilege to serve with him on the Supreme Court.”

Justice Chin served as Presiding Justice of the First District Court of Appeal, Division Three, in San Francisco from 1995 to 1996, and as an associate justice of that court from 1990 to 1994. Chin first joined the bench as an Alameda County Superior Court judge in 1988 where he developed an unexpected interest and dedication to his first assignment presiding over family law cases. Justice Chin was the first Asian-American President of the Alameda County Bar Association in its more than 100-year history. 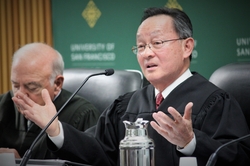 Justice Chin earned a Bachelor of Arts in Political Science in 1964 and a Juris Doctor in 1967 from the University of San Francisco, where he later became an adjunct professor. After graduating law school, Justice Chin served two years as a Captain in the U.S. Army and was decorated with the Bronze Star and the Army Commendation Medal for his service in Vietnam.

After returning from Vietnam in 1970, Justice Chin joined the Alameda County District Attorney’s Office and was promoted to felony trial deputy. In 1973, he was recruited by Oakland law firm Aiken, Kramer & Cummings to head its trial department, becoming a partner just three years later.

Justice Chin is the son of Chinese immigrants and the youngest of eight children. His parents never had the opportunity to attend elementary school but taught the children the power of education to transform their lives. Justice Chin grew up working seven days a week on his family’s potato farm near Klamath Falls, Oregon—and by a young age he was operating a tractor, Jeep, hay baler and combine.

Justice Chin said he was inspired to become a lawyer after his private Catholic boarding school stopped providing room and board to its students, and he went to live with the family of a local judge. His mentor brought him to the courthouse to watch jury trials. By the time he was 12 years old, he was reading Sir William Blackstone’s Commentaries on the Laws of England.

Justice Chin has been married to wife Carol for 48 years and has two children – Jennifer Chin, who is senior counsel for the University of California’s Office of the President, and Jason Chin, an Alameda County Superior Court judge. 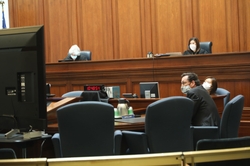