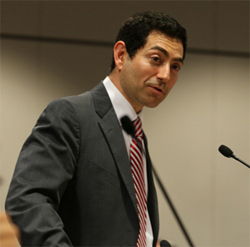 How can California courts assure that those with limited English have equal access to justice? It's a big challenge in a state where 7 million people say they speak English "less than very well."

At its Feb. 26 meeting, the Judicial Council heard an update on these efforts from California Supreme Court Justice Tino Cuéllar, who chairs the Language Access Plan Implementation Task Force.  Presentation

"The goal is to develop and support a culture in which language access is considered a core court service, and a crucial component of access of justice,” Justice Cuéllar said

New resources are being created for courts to better serve court users who struggle with English. A new model notice translated into eight languages will inform court users about the availability of language services.

A new online toolkit has also launched with information and resources for courts and the public.

The task force is also working on other efforts, including training for judges and court staff, and a project to pilot video remote interpreting (VRI) technology in trial courts, to inform a long-term VRI strategy for the judicial branch.