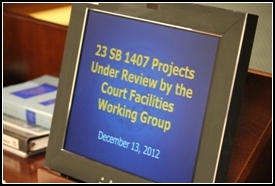 The much-needed Long Beach courthouse is currently under construction and due to open in fall 2013. The project is being delivered under a unique performance-based infrastructure method, authorized by legislation in 2007. Senate Bill 1407, which authorized up to $5 billion in court construction funding through court user fees, passed a year later.

“Difficult and devastating as it is to tell more courts that their much-needed and long-awaited projects may not move forward, the branch has a responsibility to proceed with only those projects that we know we can currently afford,” said Justice Brad R. Hill, chair of the Court Facilities Working Group and Administrative Presiding Justice of the Court of Appeal, Fifth Appellate District. “All of these projects are desperately needed, and all residents throughout the state deserve access to justice in courthouses that are safe, secure, and accessible, so these decisions are very painful.

“We have been working for months advocating that the Long Beach courthouse be paid for by the General Fund, as was originally planned, and not burden the account that funds so many other urgently needed projects throughout the state. The first of the ongoing payments for Long Beach comes due in the next fiscal year, and current indications are that there will not be General Fund dollars available. We’ll continue to advocate for resolution of the funding for Long Beach from the General Fund so that these other communities would not be disadvantaged.”

The Judicial Council had already voted in October to indefinitely delay seven projects due to budget reductions. The council’s Court Facilities Working Group met today to revisit 23 planned projects because of the potential for another unexpected $550 million that would be needed to accommodate yearly payments for the Long Beach project.

The recommendations—which Justice Hill hopes will go before the Judicial Council in January 2013—include: a new criminal courthouse for downtown Sacramento, a replacement for the overburdened courthouse in Huntington Park for the Southeast Court District in Los Angeles, and renovation projects planned for downtown courthouses in Fresno and Nevada City. The draft recommendations include a special direction for the Sacramento project: a recommendation that site acquisition proceed for that project, a $10 million commitment to the developer of the Railyards that would allow the project to proceed as planned when funding becomes available.

During the meeting, courts whose projects were slated for deferral gave presentations and answered questions from the working group. Using the same process that ultimately delayed seven projects last fall, the working group will post the draft recommendations on the California Courts website for two weeks for public comment, then submit finalized recommendations to the Judicial Council for review early next year.

Of the projects originally slated to be funded by SB 1407, eight are proceeding this year, with many of those due to start construction in 2013. The working group is recommending that another 19 projects continue moving forward as funding allows.