Twelve-year-old Faith Powell shares how she found her "forever family" eight years ago, and how today she wants to give back to those youth living in foster care.
Natasha Payés
415-865-7740

Eight years ago, the theme for San Bernardino Superior Court’s Adoption Finalization Day was “Over the Rainbow.” There was face painting and arts and crafts for the 80 children who would be adopted.

Faith Powell, now a seventh grader at Clement Middle School, doesn’t remember much from that day, but her mother Tracey will never forget the day Faith officially became her daughter.

“It’s kind of like a marriage. It’s really a neat process,” said Tracey, referring to the adoption process.

At its October 28 meeting, the Judicial Council of California proclaimed November Court Adoption and Permanency Month. The annual resolution recognizes the efforts of California’s courts and their justice partners in providing safe, stable, and permanent homes for youth in foster care. Adoption Days are annual events in which local courts carry out numerous adoptions in one day during the month of November.

“Adoption Finalization Day is great because the kids see that they’re not the only ones in their situation,” Tracey said.

Ever since Faith found her adoptive family, which she calls her “forever family,” she has transformed from a withdrawn girl into a gregarious, self-assured and confident young woman with a giving heart.

“When she first came home, Faith wouldn’t give eye contact or didn’t want contact with anyone,” said her mother. “Compared to who she was and who she is now, she’s not even the same kid,” she added.

Today, Faith is a community leader who organizes annual shoe and toy drives to purchase Christmas gifts for foster and underprivileged children. It’s her way of giving back to her community, particularly the foster care community.

“I didn’t get a lot, so I’m going to give a lot,” said Faith, reflecting back on her 14-month period in the foster care system.

With the help of neighbors and local businesses, Faith collects and sends donated shoes to an organization called Cash4Shooz, which purchases gently worn shoes. Faith then uses those monies to purchase gifts for children 12 years and older, in addition to organizing a toy drive.

Faith said she makes a point to buy gifts for older foster youth, such as make-up kits, basketballs and iPods, because normally this age group doesn’t receive as many gifts as younger foster children.

This year, Faith raised $2,100 from her shoe drive—a personal record. In a few weeks, she’ll purchase and deliver toys to the Children’s Fund, a non-profit organization that provides essential services and resources to underserved children.

Although organizing two fund raisers takes a lot of work and community support, it’s a rewarding process. Or as Faith put it, “I’m making someone feel better about themselves. I want to be a good person.”

About 25,000 children enter the foster care system every year. Approximately 61,900 children are in foster care in California, according to the Judicial Council’s Center for Families, Children and the Courts. 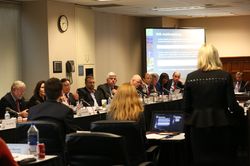