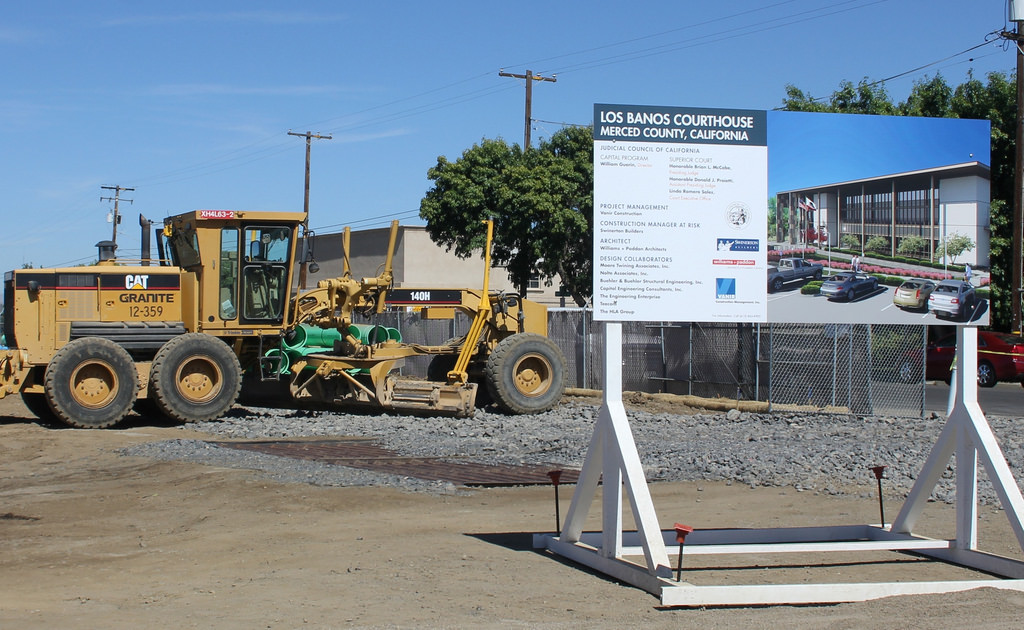 (Scheduled to open Fall 2016) Merced County spans 1,935 square miles, so building a full-service courthouse in Los Banos, with room to expand, assures residents have access to justice within a reasonable distance for years to come. More

The Court Facilities Advisory Committee today voted to recommend to the Judicial Council that all 23 current judicial branch projects continue based on the general criteria of working with available funding, not incurring additional costs, or wasting funds. Projects would be grouped into four broad categories that would determine how far an individual project can proceed until adequate funding is restored.

The proposed categories are "Currently Under Construction", "Acquisitions", "Ongoing Design Work", and "2016/17 Construction Awards" that would determine how far forward a project would proceed. The projects were grouped as follows:

Approximately $1.4 billion was redirected, borrowed, shifted, and transferred from the Immediate and Critical Needs Account, and $250 million of annual funds in the construction account—$110 million (almost 45 percent)—has been permanently redirected to other purposes that were never part of the original plan to replace the most immediate and critical courthouses,” according to Presiding Justice Brad Hill, Chair of the facilities committee. “We are trying to replace facilities that have severe security, seismic, ADA, space and other deficiencies. This is a matter of providing the public and all court users with safe and secure courthouses to access justice. Tens of thousands of Californians visit our courthouses on a daily basis—they deserve nothing less.”

Sixteen local courts gave presentations to the Judicial Council Court Facilities Advisory Committee in an effort to preserve their local “immediate and critical need” courthouse projects, and to advocate for adequate funding for safe and secure courthouses statewide.

Construction fund redirections during the state’s fiscal crisis and a decline in funds from reduced filings have dramatically cut the funds available for the bonds needed to replace unsafe and substandard facilities and build court facilities that serve the needs of all court users.

The next steps for the committee will involve preparing a report for the Judicial Council’s August 25-26 Meeting, and continuing funding advocacy efforts on behalf of the judicial branch and local courts and justice system partners with the Legislature.