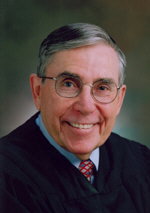 LOS ANGELES—The Honorable Justice H. Walter Croskey passed away after a brief illness on August 29, 2014. He was a lifelong resident of Los Angeles and a longtime resident of Pacific Palisades.

Chief Justice Tani G. Cantil-Sakauye commented that, “Justice Croskey’s passing is sad news for the judicial branch. He was a beloved figure for all who worked with him or for him. He will be deeply missed. He served in Division Three and August 29th, was the 20th anniversary of that four-justice panel—one of the longest tenures of any appellate panel in California. Justice Croskey was the chair of the Judicial Council’s Advisory Committee on Civil Jury Instructions. With this position and with past participation in a host of other Judicial Council committees and programs he was clearly committed to increasing access to justice.”

"Justice Croskey was my colleague on this court for over two decades,” said Administrative Presiding Justice Roger W. Boren, “Just about everyone on this court admired and respected him. He was friendly, full of good humor, and extremely insightful. When a district-wide issue would arise, it would often be Walt Croskey, who asked the penetrating question concerning the matter. He was always cooperative and willing to share his time and wisdom for the good of the Court. I will miss a very good friend and advisor."

His long-time colleague on the Court of Appeal, Second Appellate District, Division Three, Associate Justice Richard D. Aldrich noted that, "Justice Croskey was a man of enormous personal and professional integrity. He was a brilliant scholar, teacher and mentor to lawyers and judges. His body of legal opinions will guide future generations."

From 1959–1962, Justice Croskey served as Lieutenant in the Office of the US Navy Judge Advocate General. After leaving the Navy, he was a civil trial attorney for 23 years. In 1985, Governor George Deukmejian appointed Justice Croskey to the Los Angeles County Superior Court. In 1987, Governor Deukmejian elevated him to the Second District Court of Appeal, where he served as an Associate Justice until his death.

Justice Croskey had a passion for the law. He was highly respected in the legal community and received many prestigious awards over the years. Some of these include: the Bernard S. Jefferson Award, Distinguished Service in Judicial Education by the California Judges Association; the Roger J. Traynor Memorial Award-Appellate Justice of the Year by the Los Angeles Trial Lawyers Association; the Distinguished Service Award-Jurist of the Year by the Judicial Council of California; and the Jurist of the Year Award by the Los Angeles County Bar Association.

Most recently, Justice Croskey was honored by the Los Angeles County Law Library with the Beacon of Justice Award.

Justice Croskey was recognized as a leading authority on California insurance law. He was a co-author of the Rutter Group California Practice Guide for Insurance Litigation. For the last decade, he served as Chair of the Judicial Council Advisory Committee on Civil Jury Instructions.

According to his colleagues and friends he was a man of enormous personal and professional integrity and great collegiality. He possessed a keen intellect and a vast knowledge of the law. He was a scholar, a teacher and a mentor to lawyers and judges. His extensive body of legal opinions will guide future generations.

For many years, he was a Trustee/Elder at the Pacific Palisades Presbyterian Church. He was a valued member of the church family and will be sorely missed.

Walter is survived by Diane, his loving wife of 51 years, and his daughters Pam and Linda. Donations in his memory may be sent to the Pacific Palisades Presbyterian Church, or the charity of your choice.