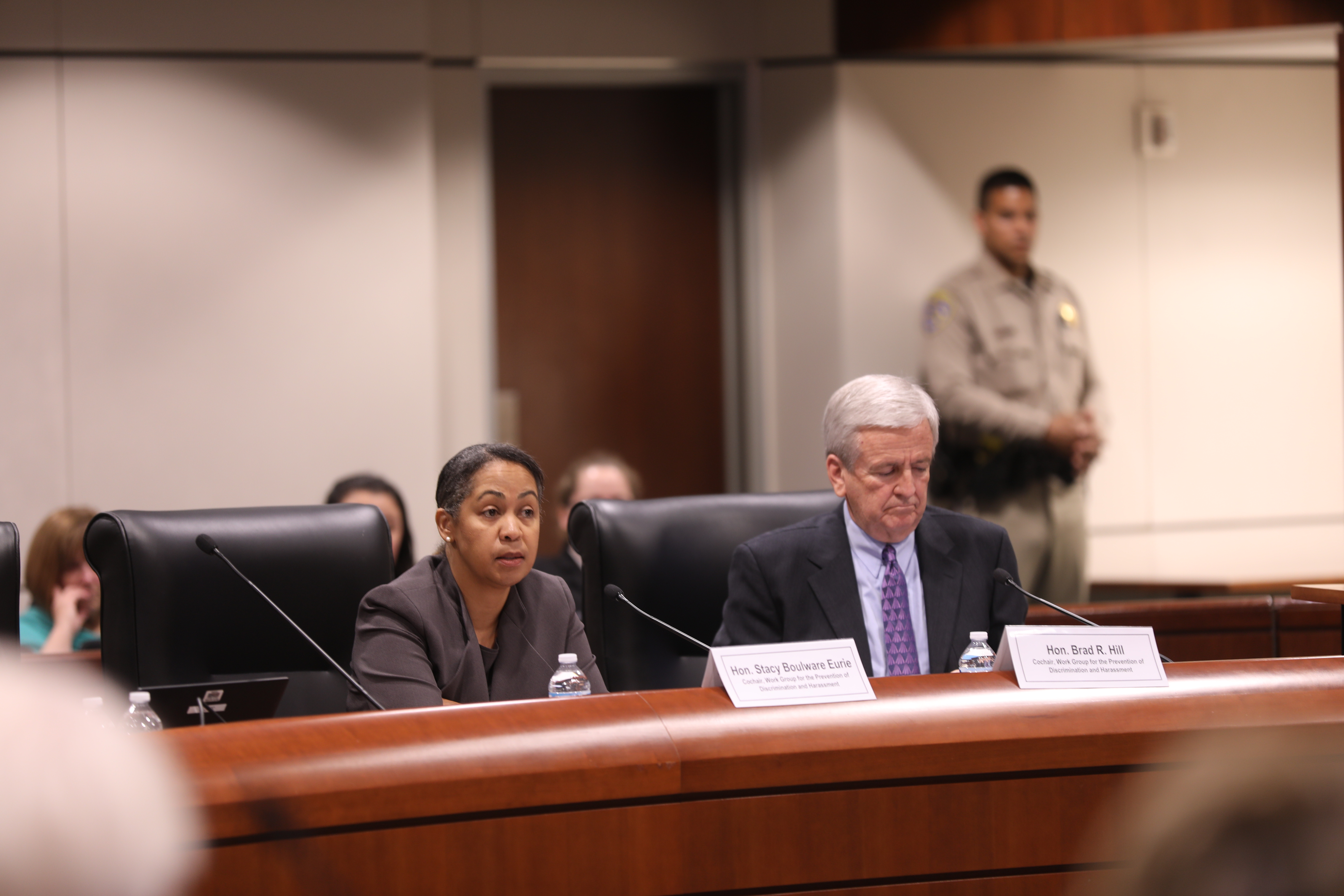 Cochairs of the Work Group for the Prevention of Discrimination and Harassment Judge Stacy Boulware Eurie and Justice Brad Hill present recommendations outlined in the report.

The council approved a report from its Work Group for the Prevention of Discrimination and Harassment, which recommends the council develop new rules that clarify how courts should update their policies to expressly address inappropriate workplace conduct and complaint reporting and response procedures.

“Our recommendations today reflect our efforts to create standardized processes across our branch, while also recognizing the autonomy of individual courts to manage their operations and their workforce,” said Justice Brad Hill, cochair of the work group. “But they would need to clearly identify individuals to whom complaints may be made and what follow-up actions will be taken.”

The report says the courts should have specific workplace investigation protocols, take steps to improve communication about the policies, and gather feedback from current and departing employees to determine areas of needed improvement.

In addition, the report also recommends expanding education and resources for judges and court staff to further reduce and raise awareness about discrimination and harassment. Watch

Strategic Planning: The council reaffirmed the strategic plan for the judicial branch. The plan includes goals to protect the courts’ independence and accountability, modernize operations, provide education for judges and court staff, and ensure adequate and stable funding to improve the administration of justice for all Californians. Chief Justice Tani Cantil-Sakauye commented she has “always viewed the strategic plan as the constitution of the Judicial Council, and as a prism for all the projects that council advisory committees embark upon.” Watch

Report on Judicial Workload Measures: The council considered proposed revisions to the formula for determining judicial workload around the state, updated periodically to capture changes in law and practice. The workload study forms the basis of the Judicial Needs Assessment, which prioritizes judgeship needs around the state based on the formula. The council deferred action on the report until more work is done to study how judicial workload varies by court size. The council expects to reconsider the issue at its September business meeting. Watch

Butte County’s Remote Video Conferencing Program: The council heard from Butte court leaders on how it helped spread its Self-Help Assistance and Referral Program (SHARP) to 23 superior courts. The program enables courts to offer self-help forms, resources, and help online to court users. The program also reaches court users via videoconference, including shared live workshops where one legal assistant can help participants from multiple sites. The project is one of 49 programs supported by the Court Innovations Grant Program to promote court innovations and efficiencies. Watch

New Funding for Legal Services, Dependency Counsel: The council voted to allocate to the courts the increased funding provided in this year’s state budget for legal services to low-income persons involved in landlord/tenant issues and for court-appointed dependency counsel representing children and parents.

Workload-based Formula for Trial Court Funding: The council approved a proposal to increase the accuracy and consistency of how trial court funding allocations are calculated, one of the principal responsibilities of the Judicial Council. The changes take effect for fiscal year 2019–20 allocations. Watch