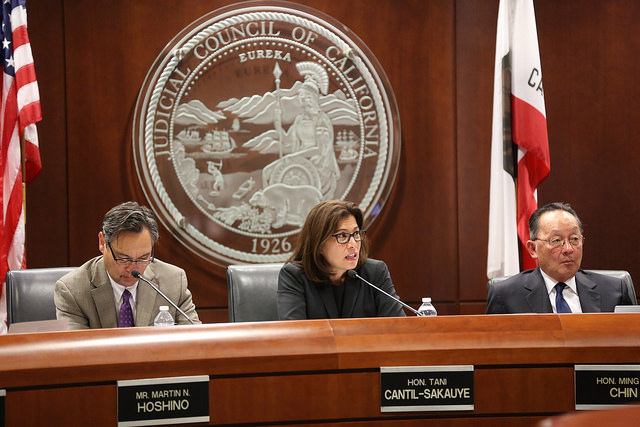 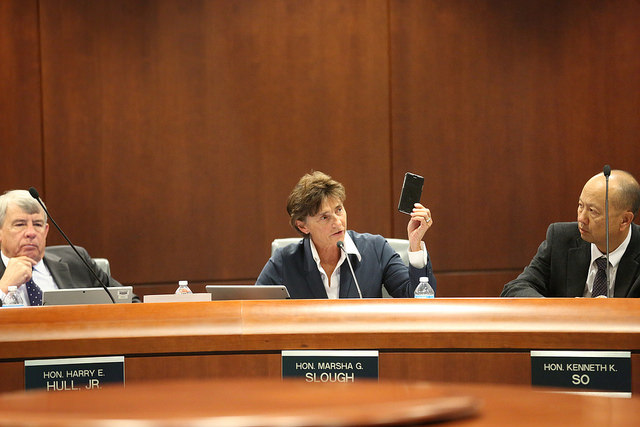 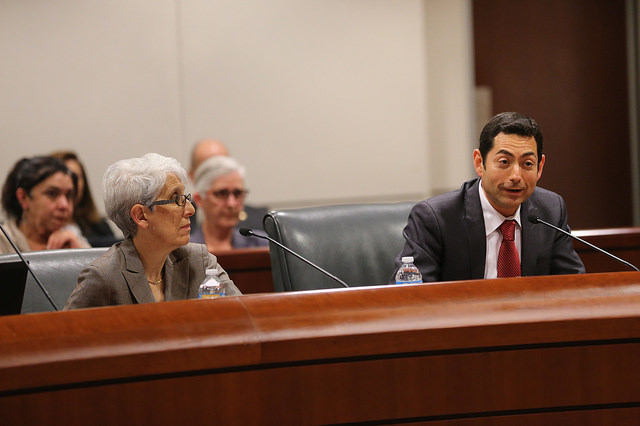 Justie Laurie D. Zelon and Justice Tino Cuellar update the council on efforts to improve language access in the courts.

Members of the Superior Court of Solano County Mentorship Program pay a visit to the Judical Council and sit in on the meeting.

SAN FRANCISCO--The Judicial Council at its May 18-19 business meeting approved recommendations to temporarily modify how it distributes funding to small courts for court-appointed attorneys in juvenile dependency cases. Pursuant to the new funding model, more than $1 million will be shifted from large courts to small courts in each of the next two fiscal years.

Small courts, defined as the 30 courts in California counties with the lowest child welfare caseloads (fewer than 400 children in child welfare), generally have less access to qualified court-appointed attorneys. These smaller courts, located in more remote and less-populated counties, must pay the attorneys more for their time and travel than larger courts in more populated counties.

“This is a great example of branchwide thinking,” said Judge Jeffrey Barton, a council member and presiding judge of the Superior Court of San Diego County. “The courts that are receiving less under the formula―Los Angeles, in particular―have supported the proposal so it works for the good of all.”

Funding for dependency counsel is provided through the state budget and is allocated by the Judicial Council based on formulas developed by a council committee. The council calculates it needs a total of $202.9 million statewide to adequately fund court-appointed dependency counsel for local courts but currently receives only $114.7 million.

“Trying to divide up this paltry amount is substandard and insufficient for the needs that we have,” added Chief Justice Tani G. Cantil-Sakauye, who serves as chair of the council. “Some of the first words out of our mouths in budget meetings with legislators is ‘dependency funding’ and that the amount we receive is not nearly enough.” Watch

Other items on the May 18-19 council meeting agenda included:

Reducing Energy Use in Courthouses: Due to a projected $10.3 million funding shortage for courthouse operations, maintenance, and utility costs for the next fiscal year, the council directed staff to work with local courts to implement a series of conservation and energy-efficiency strategies. The plan includes a goal of reducing utility costs by 10% related to facilities lighting; heating, ventilation, and air conditioning (HVAC); and plug load. Watch

Language Access to the Courts: The council received an update on the progress of its Language Access Plan Implementation Task Force, including a report on how courts can improve “wayfinding” strategies and multilingual signage in courthouses. The task force also noted accomplishments to date, such as its online language access toolkit and expanding access to interpreters in civil cases. Watch

Chief Justice Moves Futures Commission Report Forward: Chief Justice Tani G. Cantil-Sakauye directed immediate Judicial Council action on four recommendations from the Futures Commission that are within the purview of the judicial branch, including civil adjudication of minor traffic infractions to simplify the process for Californians, the courts, and law enforcement. Watch