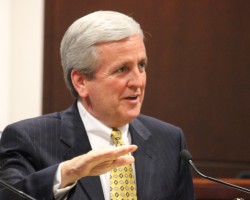 SAN FRANCISCO—At the second day of its 2-day public meeting on April 24–25 in San Francisco, the Judicial Council approved a new manual that will guide the strategic management of the judicial branch’s courthouse construction program.

“Our branch’s goal is to manage the courthouse construction program as effectively, efficiently, and transparently as possible” said Justice Brad Hill, Administrative Presiding Justice of the Court of Appeal, Fifth Appellate District, and the chair of the council’s Court Facilities Advisory Committee. “The manual will help ensure uniform and accountable processes for the execution of our sorely needed courthouse construction projects.”

The Judicial Branch Capital Program Management Manual sets out a uniform set of policies, procedures, and processes to coordinate the management and control of the capital program. The manual also establishes formal, detailed delegations of authority, clearly delineating the committee, office, or position with the authority to make decisions and take actions in regard to construction projects on behalf of the Judicial Council.

The manual was prepared at the Judicial Council’s direction as one of the recommendations of the California Courthouse Capital Program Management Audit Report, which was prepared by Pegasus Global Holdings, Inc. and adopted by the council in October 2012.

Other actions and discussions that took place at the council meeting:

Reducing Costs of New Courthouses: The council received an update from a subcommittee of its Court Facilities Advisory Committee on efforts to reduce the costs of constructing new courthouses. The Courthouse Cost Reduction Subcommittee developed a protocol to review the scope and budget for projects, and created program-wide metrics to reduce the size of the new courthouses and refine site requirements. To date, the 26 projects reviewed in the pre-construction phases have a construction value of approximately $1.5 billion. Thus far, the budgets for those 26 projects have been reduced by more than $360 million—saving both hard construction costs and other project costs, such as fees for technical consultants and the cost to acquire property.

Criminal Justice Realignment—Background and Overview of Initiatives: As part of its educational agenda, the council received an update from representatives from courts, counties, law enforcement, and probation on the following topics: the sentencing changes and new roles and responsibilities of the courts; state and local government representatives’ roles, efforts, and observations related to implementation of realignment; and new or expanded realignment training, programs, and services provided by local courts and the Judicial Council/Administrative Office of the Courts (AOC). For example, the council heard about: the successful use of pre-trial risk-assessment tools that give judges valuable information before they make their sentences; judges’ increased use of split sentencing, in which the convicted persons serve the first part of their sentences in jail and second part under mandatory supervision; and a specialized reentry and mandatory supervision calendar that relies on the collaboration of representatives from the court, sheriff, district attorney, public defender, probation, and Health and Human Services agencies.

Online Knowledge Center for Trial Court Efficiencies: The council approved a recommendation from its Task Force on Trial Court Fiscal Accountability for the development of a web-based Innovation Knowledge Center to focus on identifying efficient and effective trial court programs and practices that provide greater access to justice. The knowledge center provides an online means of highlighting and sharing programs with the goal of encouraging their replication, as appropriate, in courts across the state. Presiding judges and court executive officers from around the state have already catalogued 75 such programs.

New Case Management System in San Luis Obispo Court: The council received an update from the Superior Court of San Luis Obispo County on the successful implementation of its new case management system. The court is using the Odyssey system, from Tyler Technologies, in all of its divisions and case types, replacing more than 20 different and antiquated systems it used previously.

AOC Restructuring: Efficiencies and Restructuring at the AOC Legal Services Office: The council received a report on restructuring in the Legal Services Office (LSO) of the Administrative Office of the Courts (AOC). The mission of LSO is to provide quality, timely, and ethical legal advice and services to the Chief Justice, the Judicial Council, council advisory committees and task forces, the appellate and trial courts, and the AOC. In response to the council’s restructuring directives and the recommendations of the council’s liaisons to LSO, the office has been significantly restructured. The report includes details of changes related to the role of the office’s Chief Counsel, its management structure, use of outside counsel, the practice of permitting attorney resources to reside in AOC field offices, and soliciting client feedback.

An archived audiocast of the entire meeting broken out by topic will be available on the April 24-25 council meeting webpage early next week.