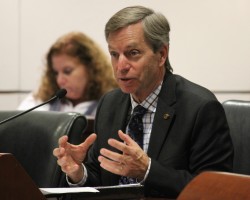 SAN FRANCISCO—At the first day of its 2-day public meeting on April 24–25 in San Francisco, the Judicial Council approved a new rule of court that provides greater public access to meetings of the council’s internal and advisory committees and of other multimember bodies that the council creates to review issues and report to it.

The rule—which was developed by the chairs of its five internal committees with input from court leaders, the Legislature, the news media, labor groups, and the public—recognizes the importance of open meetings, especially on matters concerning the judicial branch budget. However, the rule balances the importance of open meetings with significant judicial branch concerns, including ethics constraints for judicial officers who volunteer to serve on such bodies, staffing and other resource limitations, and the need to maintain an effective rule-making process.

“The open-meeting rule marks a new era for the judicial branch in California and sets a high bar for the judicial branches in other states,” said Justice Douglas Miller, Court of Appeal, Fourth Appellate District, who chairs the council’s internal Executive and Planning Committee. “We will no doubt have to iron out any kinks in the rule as we go forward, but we’re moving in the right direction—a direction that was set out for us by our Chief Justice when she made council meetings more open when she came into office a little more than three years ago.”

Other actions and discussions that took place at the council meeting include:

Report to the Legislature: $60 Million Augmentation in the 2013 Budget Act: The council approved a report to the Legislature that includes individual trial court plans and activities intended to help maintain or increase public access to justice with their share of the budget augmentation that was included in the 2013 Budget Act. To the extent possible, courts used their augmentations to address staffing, darkened courthouses and courtrooms, public service availability, and backlogs in case and document management. While their share of the $60 million enabled courts to address some gaps in their budgets, there remains $415 million in permanent ongoing reductions to trial courts since FY 2008–09, as well as unfunded increases in employee health benefits and retirement costs. Without additional funding to erase existing structural deficits, courts anticipate significant additional service reductions.

New Fiscal Year 2014–2015 Budget Request for Trial Courts: The council approved a recommendation from its Trial Court Budget Advisory Committee to request from the state Department of Finance a $70 million General Fund ongoing augmentation to the Trial Court Trust Fund to address a projected shortfall in civil fee and criminal-case-related revenues that support trial court operations.

Maximum Reimbursement of Unused Savings for Court Interpreter Expenditures: Based on a recommendation from its Trial Court Budget Advisory Committee, which sought input from the council’s Court Executives Advisory Committee, the council approved a maximum reimbursement from the Trial Court Trust Fund Program 45.45 unused savings for newly eligible costs related to court interpreters for appearances in domestic violence cases, family law cases in which there is a domestic violence issue, elder or dependent adult abuse cases, and for indigent parties in civil cases. The recommendation also directs staff from the Administrative Office of the Courts (AOC) to track the rate at which the unused savings are being drawn down and report that information to the trial courts and the Trial Court Budget Advisory Committee.

An archived audiocast of the entire meeting broken out by topic will be available on the April 24-25 council meeting webpage early next week.