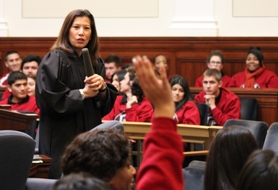 SAN FRANCISCO—Chief Justice Tani G. Cantil-Sakauye will continue her month-long focus on civic learning with a visit to the C.K. McClatchy High School’s Law and Public Policy Academy in Sacramento on Thursday, February 21, 10:00–11:00 a.m., where a student panel has been selected to ask the Chief Justice questions.

The visit comes as a follow-up to the Law and Public Policy Academy’s attendance at the Supreme Court’s oral argument session in San Francisco on Wednesday, February 6, where the students heard two cases being argued before the court. The visit is latest in a series of student outreach programs by the Chief Justice and the Supreme Court to improve public understanding of the state court system.

“C.K. McClatchy High School is my alma mater and I was particularly pleased to welcome the academy students to our court’s recent oral argument session and give them a unique opportunity to experience the Supreme Court and their constitutional democracy in action,” said Chief Justice Cantil-Sakauye. “I am advocating for improved civics education so that our students and our citizens understand that the strength of our democratic institutions relies on the public’s understanding of those institutions.”

The Law and Public Policy Academy at C.K. McClatchy High School was created two years ago. Students take core classes together and supplement their schedules with elective courses. The goal of the program is to provide experiences engaging to students and a rich curriculum centered around the law, augmented with guest speakers and field trips. Research has shown academy-style learning promotes academic success, produces more high school graduates, and leads more students to pursue higher education.

“The fact that the Chief Justice of California came from their school makes this a great opportunity for the students to question and learn from her academic and professional background and identify possible career paths,” said Bennae Dillingham, Coordinator of the Law and Public Policy Academy. “Being in the courtroom during the oral arguments showed them firsthand the important work of the Supreme Court and how it impacts how our state functions under the rule of law.”

The visit to C.K. McClatchy High School is part of a month-long program by Chief Justice Tani G. Cantil-Sakauye to raise awareness about the importance of civics to our society and to focus attention on the need for civic learning in California.

The month of outreach on civics education will culminate with the Civic Learning California Summit: Making Democracy Work in Sacramento on February 28 where the Chief Justice will be joined by U.S. Supreme Court Justice Sandra Day O’Connor (Ret.), Secretary of State Debra Bowen, State Superintendent of Public Education Tom Torlakson, and others interested in civic learning.