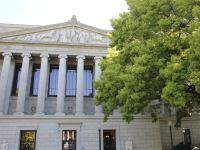 The 1928 building serves as the Sacramento home of the Supreme Court, and the permanent location of the Court of Appeal, Third Appellate District and the California State Library. The Budget Act of 2005–2006 appropriated building construction funds for the now-completed renovation of the building. The restoration project included fire, life, safety, and infrastructure improvements and rehabilitation of the historically significant architectural elements of the building. The Library and Courts Building is listed on the National Register of Historic Places and was rededicated in November 2002 as the Stanley Mosk Library and Courts Building.

“The Supreme Court justices and staff are delighted to return to the court’s Sacramento home and to renew our practice of hearing regular oral arguments in our state capital, as well as in San Francisco, Los Angeles, and other special session locations across our state,” said Chief Justice Tani G. Cantil-Sakauye. “Our Sacramento courthouse has special significance for us, as it is named after the longest-serving member in the court’s history, the late Justice Stanley Mosk, who authored almost 1,700 opinions spanning 88 volumes of the California Official Reports and whose legacy underscores the importance of constitutional rights and individual liberties.”

The Supreme Court’s two-day oral argument calendar is as follows:

The oral argument calendar, accompanied by summaries of the cases to be argued, is also posted on the court’s Website. Each of the oral arguments will be broadcast live on The California Channel as well as live-streamed on its Website.

Justice Richard M. Mosk of the Court of Appeal, Second Appellate District, son of the late Supreme Court Justice Stanley Mosk, was randomly assigned, in rotation, as one of three Court of Appeal justices sitting as assigned justices pro tempore during the two-day oral argument session.

Seating in the courtroom will be limited and members of the media requesting a media seat at the oral arguments should contact the court’s Public Information Officer, Cathal Conneely.