Budgeting for the California judicial branch is a multi-step and collaborative process, with an ultimate goal of providing adequate, stable, and sustainable funding for court operations and services. This collaborative process has helped the judicial branch in its continuing efforts to recover from significant budget cuts made since the great recession began in 2008.

Court input into budget process
The annual budget process requires substantial input from many of the Judicial Council’s advisory committees, which are mostly made up of representatives from the courts. These include committees of presiding justices and judges, as well as court executive officers. The council also relies on its budget committees, which help develop and review financial policies, requests, allocations, and other funding issues. These budget committees also submit budget proposals to the full council for its consideration and approval.

Three-branch process
Once the council approves or amends budget proposals from its budget advisory committees, it submits the proposals to the state Department of Finance for consideration in the Governor’s initial budget proposal released in January. This sets the stage for the next phase of the ongoing budget development cycle, which includes discussions with the Governor’s administration, legislative hearings, meetings with legislators and their staff, and an intensive period of legislative activity to pass a balanced fiscal-year budget by the June 15 constitutional deadline.

The Legislature ultimately passes an annual budget bill and any necessary budget trailer bills that may contain funding for the courts. The Governor then has 12 days to sign the budget; once signed, the council can allocate funding to the courts.

What determines how much each court receives?
Funding for trial courts is based on a court’s annual workload—not just the number of cases received but also the types of cases handled. A traffic infraction, for example, takes far fewer resources and staff than a complex felony case and is given less weight in the calculation. Trial court filings are averaged over a three-year period to level out funding swings that might come with a surge or decline in filings.

The judicial branch budget process includes a minimum level below which a trial court’s funding cannot fall for the state’s smallest courts. In addition, the council uses statistics from the U.S. Bureau of Labor to factor in the differences among courts in costs of employee salaries. While the council calculates a trial court’s budget allocation, each court gets to decide how to spend that money.

While the majority of a trial court’s budget is determined with this workload formula, a few programs within those courts have their funding specifically outlined in the state budget act, including money for dependency counsel and court interpreters.

The case for shifting away from reliance on court fines and fees
Over the last 20–30 years in California, many programs at state and local levels (including the state court system) receive a portion of their funding from fines, fees, and assessment surcharges. In order to pay for these programs, the state added to base fines a series of “add-ons” consisting of penalties, surcharges, and assessments. But these add-on charges make the total fine amount difficult to afford for many people and has led to more than $10 billion in uncollectible delinquent debt. The judicial branch has advocated for a three-branch (Executive–Legislative–Judicial) solution to this funding structure and its reliance on fines and fees from court users. 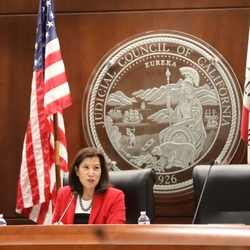 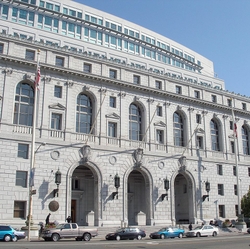