Building Courthouses in a Time of Scarce Resources

Roughly $1.4 billion was taken from the courthouse construction fund during the state's fiscal crisis, forcing the delay of critical new courthouse projects statewide.

A Look at Safety in California’s Older Courthouses
Dozens of counties in California lack safe and secure courthouses. Problems faced by the Sonoma court are typical of other courts around the state.

Audio Story: "We Need New Courthouses"
Broken elevators and the lack of separate waiting areas for the public and inmates are just a couple of the issues faced by court staff around the state. Listen to judges from Inyo, Lake Los Angeles counties talk about the issues impacting their courts.


The core considerations for new courthouse construction are safety, security, and accessibility.


More on the Courthouse Construction Fund
The passage of Senate Bill 1407 (Perata, 2008) established special revenues for courthouse improvements, allowing the judicial branch to upgrade infrastructure used by millions of courthouse users. However, due to fund redirections initiated by the state in response to the Great Recession of 2008, the construction fund will no longer meet all court infrastructure needs.

The Court Facilities Advisory Committee today voted to recommend to the Judicial Council that all 23 current judicial branch projects continue based on the general criteria of working with available funding, not incurring additional costs, or wasting funds. Projects would be grouped into four broad categories that would determine how far an individual project can proceed until adequate funding is restored.

Projects Statewide Put on Hold
Here are the counties currently waiting for the green light to move forward with their construction projects: 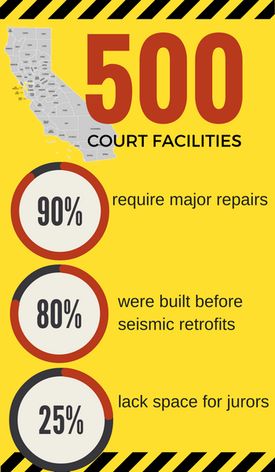